The Collected Poems of Langston Hughes 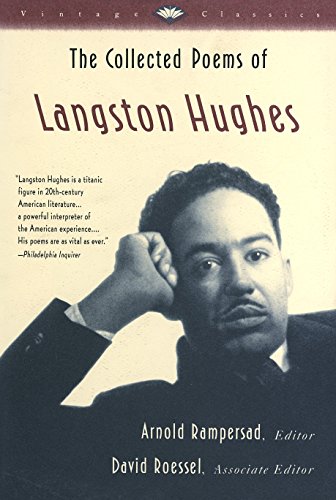 "The ultimate book for both the dabbler and serious scholar--. [Hughes] is sumptuous and sharp, playful and sparse, grounded in an earthy music--. This book is a glorious revelation."--Boston Globe

Spanning five decades and comprising 868 poems (nearly 300 of which have never before appeared in book form), this magnificent volume is the definitive sampling of a writer who has been called the poet laureate of African America--and perhaps our greatest popular poet since Walt Whitman.  Here, for the first time, are all the poems that Langston Hughes published during his lifetime, arranged in the general order in which he wrote them and annotated by Arnold Rampersad and David Roessel.

Alongside such famous works as "The Negro Speaks of Rivers" and Montage of a Dream Deferred, The Collected Poems includes the author's lesser-known verse for children; topical poems distributed through the Associated Negro Press; and poems such as "Goodbye Christ" that were once suppressed.  Lyrical and pungent, passionate and polemical, the result is a treasure of a book, the essential collection of a poet whose words have entered our common language.

Langston Hughes was born in Joplin, Missouri, in 1902.  After graduation from high school, he spent a year in Mexico with his father, then a year studying at Columbia University.  His first poem in a nationally known magazine was "The Negro Speaks of Rivers," which appeared in Crisis in 1921.  In 1925, he was awarded the First Prize for Poetry of the magazine Opportunity, the winning poem being "The Weary Blues," which gave its title to his first book of poems, published in 1926.  As a result of his poetry, Mr. Hughes received a scholarship at Lincoln University in Pennsylvania, where he won his B.A. in 1929.  In 1943, he was awarded an honorary Litt.D. by his alma mater; he has also been awarded a Guggenheim Fellowship (1935), a Rosenwald Fellowship (1940), and an American Academy of Arts and Letters Grant (1947).  From 1926 until his death in 1967, Langston Hughes devoted his time to writing and lecturing.  He wrote poetry, short stories, autobiography, song lyrics, essays, humor, and plays.  A cross section of his work was published in 1958 as The Langston Hughes Reader.

Description du livre Random House USA Inc, United States, 1995. Paperback. Etat : New. Annotated edition. Language: English. Brand new Book. Here, for the first time, is a complete collection of Langston Hughes's poetry - 860 poems that sound the heartbeat of black life in America during five turbulent decades, from the 1920s through the 1960s. The editors, Arnold Rampersad and David Roessel, have aimed to recover all of the poems that Hughes published in his lifetime - in newspapers, magazines, and literary journals, and in his books of verse. They present the poems in the general order in which Hughes wrote them, and also provide illuminating notes and a chronology of the poet's life. Arnold Rampersad, the author of the esteemed two-volume biography of Langston Hughes, has written a perceptive and moving introduction that throws light on Langston Hughes's distinctive voice as a poet and the world in which he lived. N° de réf. du vendeur ABZ9780679764083

4. The Collected Poems of Langston Hughes

5. The Collected Poems of Langston Hughes

Description du livre 1995. Paperback. Etat : New. Paperback. " The ultimate book for both the dabbler and serious scholar? Hughes] is sumptuous and sharp, playful and sparse, grounded in an earthy music? This book is.Shipping may be from our Sydney, NSW warehouse or from our UK or US warehouse, depending on stock availability. 736 pages. 1.060. N° de réf. du vendeur 9780679764083