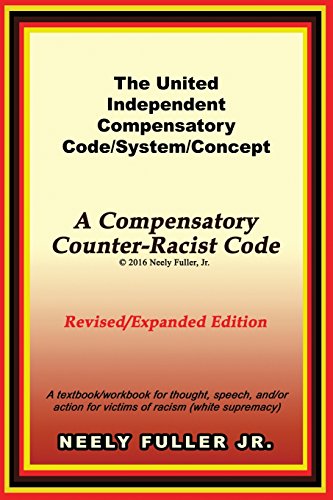 Description du livre Nfj Productions, United States, 1984. Paperback. Etat : New. Language: English. Brand new Book. I, Neely Fuller, Jr., the writer/author of these books, like millions of others, have been a long-time Victim of and Servant to Racism (White Supremacy) in all areas of activity. My experiences, observations, and/or studies have led me to believe the following: Racism has done more to promote non-justice than any other socio-material system known to have been produced or supported by the people of the known universe. No major problem that exists between the people of the known universe can be eliminated, until Racism is eliminated. The fear, frustration, malice, and confusion caused by Racism, retards or prevents all constructive activity between the people of the known universe. The only form of functional Racism that exists among the people of the known universe is "White Supremacy." The people who have the ability to eliminate Racism, do not have the will to do so, and the people who have the will to do so, do not have the ability. Regardless of all that has been said or done, the quality of the relationship between white people and black people is, and has been, a total disaster. Justice is better than Racism. As long as Racism exists, anything said or done by people that is not intended to help eliminate Racism and to help produce justice, is a waste of time and energy. Each and every Victim of Racism should minimize the time and effort spent doing anything other than thinking, speaking, and acting in a manner that helps to eliminate Racism and helps to establish justice. Each and every person should seek to do this every day, in every area of activity, including Economics, Education, Entertainment, Labor, Law, Politics, Religion, Sex, and War/Counter-War. N° de réf. du vendeur AAV9780692653210