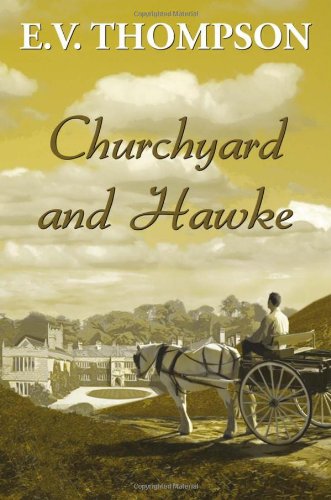 After taking a serious beating whilst engaged in unofficial undercover work in the murky streets and taverns of London's 19th century slums, Constable Tom Churchyard takes himself to Cornwall. Here, in spite of his injuries he becomes right-hand man to Amos Hawke, now a senior Cornish policeman. His knowledge of the London rogues proves invaluable as Amos seeks to foil a gang of city thieves whose plan is to plunder the mansions of the Cornish gentry. When a brutal murder is committed during their investigations it proves far more complex than appears at first glance. Churchyard and Hawke is an exciting and insightful novel of the years when the Cornwall Constabulary was in its infancy in another novel testing the investigative skills of Amos Hawke.

E.V. Thompson was born in London, After spending nine years in the Royal Navy, he served as a Vice Squad policeman in Bristol, became an investigator for British Overseas Airways (during which he was seconded to the Hong Kong Police Narcotics Bureau), then headed Rhodesia's Department of Civil Aviation Security Section. While in Rhodesia, he published over two hundred short stories before moving back to England to become a full-time award-winning writer. His first novel, Chase the Wind, the opening book in the Retallick saga, won the Best Historical Novel Award, and since then more than thirty novels have won him thousands of admirers around the world.