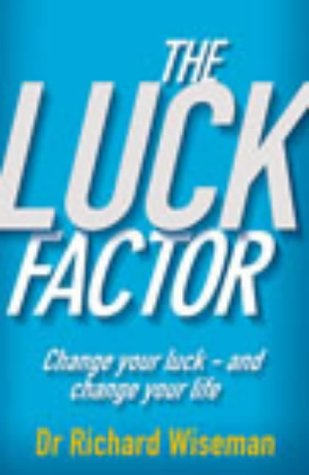 Principle:Lucky people create, notice and act upon the chance opportunities in their life
Lucky people’s lives are full of chance opportunities. In the last chapter I described the life of professional poet Jodie, whose lucky chance encounters have helped her achieve many of her lifelong dreams and ambitions. We also met Lee, a marketing manager who has an uncanny knack of being in the right place at the right time. He met his future wife by chance and puts much of his success in business down to lucky encounters. Then there was serial competition winner Lynne. The entire course of Lynne’s life was altered when, quite by chance, she came across a newspaper article about a woman who had won several prizes in competitions. Lynne, Lee and Jodie were typical of the lucky people involved in my research. Without trying, opportunities just seem to come their way.

Wendy is a 40-year-old housewife. She considers herself lucky in many aspects of her life, but is especially fortunate when it comes to winning competitions. On average, she wins about three prizes a week. Some of these prizes are quite small, but many have been substantial. In the last five years she has won large cash prizes and several major holidays abroad. Wendy certainly seems to have a magical ability to win competitions – and she is not the only one. In the previous chapter I described how Lynne has won several large prizes in competitions, including several cars and holidays. The same is also true of Joe. Like both Wendy and Lynne, Joe considers himself to be very lucky in many areas of his life. He has been happily married for forty years and has a loving family. However, Joe is especially lucky in competitions, and his recent successes include winning televisions, a day spent on the set of a well-known television soap opera, and several holidays.

People always said to me they think I’m very lucky because of the amount of competitions that I win. But then they tell me that they don’t enter many themselves, and I think, ‘Well, if you don’t enter, you have no chance of winning.’ They look at me as being very lucky, but I think you make your own luck ... as I say to them ‘You’ve got to be in to win.’

I wondered whether the same idea might also account for the other types of opportunities that lucky people constantly encounter in their lives; whether this could explain why they often meet interesting people at parties and come across newspaper articles that change their lives? I managed to go backstage and discover the reality behind the illusion. And my research revealed that it could all be summed up in just one word – personality.

People who tend to think and behave in the same way are said to have the same personality. The concept of personality is central to modern day psychology, and a huge amount of time and effort has been invested in working out the best way of accurately classifying people’s personality. Although it has often been far from easy, the results have been very impressive.

SOMEWHERE ALONG THE LINE I MADE THE SWITCH AND WAS ABLE TO LOOK AT THE BRIGHT SIDE RATHER THAN THE DARK SIDE ALL THE TIME. NOW I LOOK AT EVERYTHING AND THINK HOW LUCKY I AM.
MICHELLE PFEIFFER

After years of research, most psychologists agree that there are only five underlying dimensions to our personalities: five dimensions on which we all vary. These dimensions have been found in both the young and old, in men and women and across many different cultures. These dimensions are often referred to as Agreeableness, Conscientiousness, Extroversion, Neuroticism and Openness.

I compared the personalities of lucky and unlucky people on the five dimensions of personality. The first dimension I examined is referred to as ‘Agreeableness’. This is a measure of the degree to which someone is sympathetic towards others and willing to help them. I wondered whether lucky people were the recipients of large amounts of good fortune because they tended to help others, and so others tended to help them in return. Interestingly, lucky people scored no higher on Agreeableness than unlucky people.

The second dimension that I examined was that of Conscientiousness. This is a measure of the degree to which a person is self-disciplined, strong willed and determined. Perhaps lucky people experienced more good fortune because they simply worked harder than unlucky people. But once again, there was very little difference in the Conscientiousness scores of lucky and unlucky people.

The groups did, however, obtain very different scores on the remaining three personality dimensions – Extroversion, Neuroticism and Openness. The differences explained why lucky people constantly encounter chance opportunities in their lives while unlucky people do not. Each of these personality traits relates to a different sub-principle that follows.

Sub-principle 1:Lucky people build and maintain a strong ‘network of luck’
My research revealed that lucky people scored much higher than unlucky people on a dimension of personality known as Extroversion. Extroverts are far more sociable than introverts. They enjoy spending time visiting friends and going to parties, and tend to be attracted to jobs that involve working with other people. Introverts are far more inward looking. They are happy to spend time on their own, and feel most contented when engaged in more solitary activities, such as reading a good book.

Additional research revealed that there are three ways in which lucky people’s extroversion significantly increases the likelihood of them having a lucky chance encounter – meeting a large number of people, being a ‘social magnet’, and keeping in contact with people.

First, in the same way that Lynne, Joe and Wendy increase their chances of winning prizes by entering lots of competitions, so lucky people dramatically increase the possibility of a lucky chance encounter by meeting a large number of people in their daily lives. The concept is simple. The more people they meet, the greater opportunity they have of running into someone who has a positive effect on their lives.

Take the case of Robert, a 45-year-old aircraft safety officer from England. Robert is very lucky and his life is peppered with chance encounters. A few years ago, Robert and his wife flew to France to celebrate New Year. They had intended to fly back a few days later, but heavy snowfall grounded all available flights. As the snow wasn’t going to clear for days, Robert and his wife decided to return to England by ferry, and made their way to the French port of Boulogne. However, there was a problem, as the ferry’s destination was a port that was a considerable distance from their house, and the heavy snowfall had disrupted public transport so that it was going to be impossible for them to make their way home when they got to England. Just as Robert and his wife were discussing the problem, the door of the waiting room opened, and in walked another British couple who were also going to catch the ferry. Robert started to chat to them, and was amazed to discover that they lived very close to his home. They offered to give Robert and his wife a lift and, within minutes, Robert’s problems were over.

Another time, Robert and his wife wanted to move house. They had looked at several properties, but not seen anything they liked. One day, Robert just happened to be walking along the high street and saw an estate agent he knew coming out of his office. Robert could have kept walking, but instead decided to ask the estate agent whether he had any suitable properties available. The agent said that he was sorry but he didn’t, and started to walk away. A few seconds later he turned around, and suggested that Robert look at a house that had only just come on the market. Robert immediately drove around to the house, fell in love with it and bought it that day. Robert and his wife have been living there for over twenty years and describe it as their dream home.

When I interviewed him, Robert described himself as very outgoing and talkative. He told me that if he is standing in a supermarket queue, he will often start chatting to the people next to him, and described how he frequently strikes up conversations with strangers. Robert really enjoys meeting people and spending time with them – and...

Is luck just fate, or can you change it?

A groundbreaking new scientific study of the phenomenon of luckand the ways we can bring good luck into our lives. What is luck? A psychic gift or a question of intelligence? And what is it that lucky people have that unlucky people lack? Psychologist Dr. Richard Wiseman put luck under a scientific microscope for the very first time, examining the different ways in which lucky and unlucky people think and behave. After three years of intensive interviews and experiments with over 400 volunteers, Wiseman arrived at an astonishing conclusion: Luck is something that can be learned. It is available to anyone willing to pay attention to the Four Essential Principles:

Readers can determine their capacity for luck as well as learn to change their luck through helpful exercises that appear throughout the book. Illustrated with anecdotes from the lives of the famous such as Harry Truman and Warren Buffett, The Luck Factor also richly portrays the lives of ordinary people who have been extraordinarily lucky or unlucky. Finally Dr. Wiseman gives us a look into "The Luck School" where he instructs unlucky people and also teaches lucky people how to further enhance their luck.

Smart, enlightening, fun to read, and easy to follow, The Luck Factor will give you revolutionary insight into the lucky mind and could, quite simply, change your life.