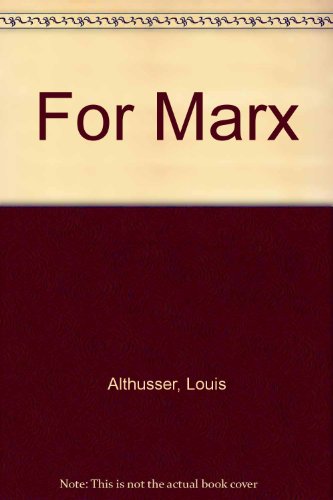 This is the work in which Louis Althusser formulated some of his most influential ideas.  For Marx, first published in France in 1968, has come to be regarded as the founding text of the school of “structuralist Marxism” which was presided over by the fascinating and enigmatic figure of Louis Althusser. Structuralism constituted an intellectual revolution in the 1960s and 1970s and radically transformed the way philosophy, political and social theory, history, science, and aesthetics were discussed and thought about. For Marx was a key contribution to that process and it fundamentally recast the way in which many people understood Marx and Marxism.

This book contains the classic statements of Althusser’s analysis of the young Marx and the importance of Feuerbach during this formative period, of his thesis of the “epistomological break” between the early and the late Marx, and of his conception of dialectics, contradiction and “overdetermination.” Also included is a study of the materialist theater of Bertolazzi and Brecht and the critique of humanist readings of Marxism. Since his death in 1990, Althusser’s legacy has come under renewed examination and it is increasingly recognized that the influence of his ideas has been wider and deeper than previously thought: reading For Marx, in its audacity, originality and rigor, will explain why this impact was so significant.

“One reads him with excitement. There is no mystery about his capacity to inspire the intelligent young.”—Eric Hobsbawm

“Louis Althusser traversed so many lives ... so many personal, historical, philosophical and political adventures; marked, inflected, influenced so many discourses, actions and existences by the radiant and provocative force of his thought ... that the most diverse and contradictory accounts could never exhaust their source.”—Jacques Derrida

Description du livre Etat : Good. Ships from the UK. Shows some signs of wear, and may have some markings on the inside. N° de réf. du vendeur 18869081-20

Description du livre Hardcover. Etat : Near Fine. Etat de la jaquette : Very Good. Dj has one very small nick on bottom edge and is lightly sunned on spine. Book itself has barley perceptible rubbing to extremities. Working copy, has some sparce notes and underlining but nearly all in the first third of book and on not more than a dozen or so pages. N° de réf. du vendeur 008554

Description du livre Hardback. Etat : Very Good. The book has been read, but is in excellent condition. Pages are intact and not marred by notes or highlighting. The spine remains undamaged. N° de réf. du vendeur GOR011161794