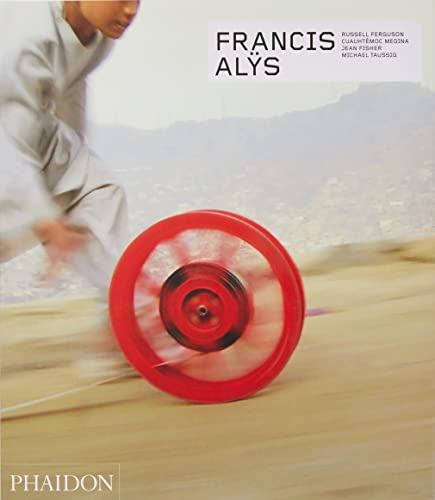 A leaking can of paint in hand, the artist strolls out of the gallery and drifts aimlessly through the cay, leaving a tral of colour as he goes. So what kind of artwork is the Leak (1995) ? , In one sense it's a painting, but a painting too large for any museum. It's also a performance, though one without an audience. Perhaps most of all, it's an invitation to take the artist's line for a walk, to explore the same path through the city, to breathe the same air and take in the same sights - and in so doing, to eliminate once and for all the division separating art from life. With humour, sensitivity and an acutely personal connection to his subject matter, Francis Al˙s examines the patterns of various urban sites before weaving his own fables into their tangled social fabric From that point onward, the fables take on a life of their own . A scene as such as a Volkswagen Beetle struggling up a hill in Tijuana (Rehearsal, 1999-2001), a man pushing a block of Ice in Mexico City (Paradox of Prams 1, 1997) or chasing a tornado in the desert (Tornado, 2000-10), or a group of children playing in the streets of Kabul (Reel-Unreel, 2011) can carry, a message that resonates far beyond the work's simple parameters. As the subbtle of his walking piece The Green Line (2004) puts it, "Sometimes doing something poetic can become political, and sometimes doing something political can become poetic". Originally from Belgium but based for the last thirty years in Mexico City, Francis Al˙s is a truly international artist who has realized works in such diverse locations as Baghdad, Copenhagen, Kabul, Lima, Jerusalem and Tanger. His work has also been exhibited at the world's top museums - including Tate Modern in London, Castello de Rivoli in Turin and the Museum of Modern Art in New York - and featured In the most significant International biennals - Including Gwangju (2009, 2018), Istanbul (1999, 2001, 2015), Sao Paulo (1998, 2005) Venice (1999, 2001, 2007, 2017) and Sydney (2008) as well as in Documenta 13 in Kassel (2012). In the Interwview, Russell Ferguson asks how the artist's identity as a cultural outsider has helped determine the remarkable path of as art over the years Cuauhtémoc Medina's Survey identifies the threads that run through the east's oeuvre while also sketching a political and social picture of Mexico City, the inspiration and setting for so many of as artworks. In the Focus, Jean Fisher examines the politic, heart of Al˙s's massive collaborative Land art project When Faith Moves Mountains (2002). In the artist's choice Augusto Monterroso's short tales capture the artist's enduring fascination with the role animals fables play in human society, Artist's writings include a series of short reflections on the everyday details of modern life as well as extracts from logbooks he wrote while working in the Strait of Gibraltar and in Iraq. Finally, In the Update, renown anthropologist MIchael Taussig takes as a starting point the time he spent together with Al˙s in Afghanistan to discuss the artist's philosophy and his most recent creative endeavours.

INTERVIEW : Russel Ferguson is Adjunct Curator at the Hammer Museum in Los Angeles, where he was previously Deputy Director Mr Exhibitions and Programs, and Chief Curator. From 2007 to 2013 he was Chairman of the Department of Art at the University of California, Los Angeles. His books include Discourses. Conversations in Postmodern Art and Culture (1990) and Out There. Marginalization and Contemporary Cultures (1990). SURVEY : Cuauhtémoc Medina is a writer and curator based in Mexico City. He is researcher at the Instituto de Investgaciones Estéticas at the national University of Mexico, Mexico City, and is Associate Curator at Tate Modern, London. He has written extensively on the work of Francis Al˙s, and has collaborated on several of the artist's most significant projects, including When Faith Moves Mountains (2002). FOCUS : Jean Fisher (1942-2016) was an art crtic and writer based in London where she was the editor of the journal Third Text and a professor of fine art at Middlesex University and the Royal College of Art. Her essays on contemporary art antl culture have been collected and published in Vampire in the Text (2003). ARTIST'S CHOICE : Augusto Monterroso (1921-2003) was one of Lahn America's most important modern authors. Borrowing from the timeless format of the fable, he populated his fantastical stories with a menagerie of characters, including sheep that sculpt ("The Black Sheep", 1969) and a snake that devours its own tail ("The Two Tails, or the Eclectic Philosopher", 1969). ARTIST'S WRITINGS : In his own writings, which he composes on an old typewriter and revises by hand, FRANCIS ALAS uncovers the poetry in everyday phrases and seemingly spontaneous arrangements of urban life. UPDATE : Michael Taussig is a professor of anthropology at Columbia University in New York and at The European Graduate School M Switzerland. A regular contributor to publications such as Culture Theory and Critioue Critical Inquiry and Cabinet, Taussig has written extensively on ethnography, medical anthropology, politics, philosophy and art and has authored over ten books, including The Devil and Commodity Fetishism in South America (1900), Mimesis and Alterity. A Particular History of the Senses (1993) and Walter Beniamin's Grave (2006).

Description du livre Etat : Nuevo. Pre-order now. This title will ship from August 19th, 2021.A fully updated edition of the artist's first comprehensive monograph, more than a decade since its original publicationFrancis Al˙s examines the patterns of various urban sites before weaving his own fables into their tangled social fabric with wit, sensitivity, and an acutely personal connection to his subject matter.A scene such as a Volkswagen Beetle struggling up a hill or a man pushing a block of ice can carry a message that resonates far beyond the work's simple parameters. As Al˙s puts it, 'Sometimes doing something poetic can become political, and sometimes doing something political can become poetic.'Al˙s's work has been included in the world's top international exhibitions, including the Venice Biennale, Documenta, the Carnegie International, and the Săo Paulo Biennal.This book features two new essays by renowned anthropologist Michael Taussig as well as new writings by the artist and exhaustive visual presentations of his recent project in Afghanistan and Iraq.The publication is timed to tie in with Al˙s's first major North American exhibition at the Los Angeles County Museum of Art opening in 2020. N° de réf. du vendeur 064167