Articles liés ŕ Day Of Deceit: The Truth About FDR and Pearl Harbor

Stinnett, Robert Day Of Deceit: The Truth About FDR and Pearl Harbor 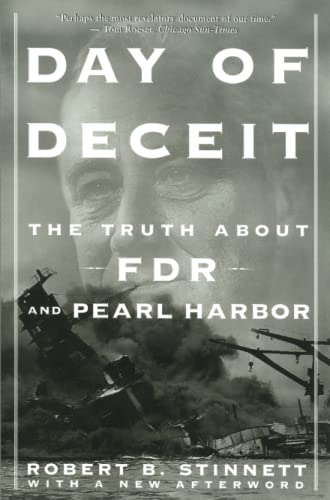 Day of Deceit Using previously unreleased documents, the author reveals new evidence that FDR knew the attack on Pearl Harbor was coming and did nothing to prevent it. Full description

Chapter One: The Biggest Story of My Life

Edward R. Murrow couldn't sleep. His wife, Janet, watched him pace in their hotel room. He was chain-smoking. Murrow, the CBS radio newsman, had just returned from a midnight meeting with President Franklin D. Roosevelt in the White House. Japan's carrier and submarine raid on Pearl Harbor had taken place twelve hours earlier, and the full impact of the military disaster was slowly sinking in for FDR and the American people.

During their twenty-five-minute discussion in the second-floor Oval Study, the President provided Murrow with something -- we will never know exactly what -- that any reporter would kill for. That night he told his wife, "It's the biggest story of my life, but I don't know if it's my duty to tell it or forget it." Long after the war ended, Murrow was asked about this meeting by author-journalist John Gunther. After a long pause, Murrow replied: "That story would send Casey Murrow through college, and if you think I'm going to give it to you, you're out of your mind."

Earlier in the week, the Murrows had accepted a personal dinner invitation from the Roosevelts. First Lady Eleanor Roosevelt personally prepared, cooked, and served supper for two dozen guests. Her specialty was scrambled eggs and sausage, cooked in an electric chafing dish that sat atop a long buffet table in the family dining room. It was the invariable menu. Since the regular White House staff was given Sunday off, she did the cooking while the President mixed the cocktails.

After he heard the first news flashes about the Pearl Harbor raid, Murrow checked with the White House to see if the supper was still on. Told that it was, he and Janet then walked across Lafayette Park, crossed Pennsylvania Avenue, and entered the mansion through the North Portico. After the Murrows were ushered into the dining room, Mrs. Roosevelt explained that the President was meeting with congressional leaders and military officers and could not join them for supper.

Outside on Pennsylvania Avenue a small crowd had gathered. The White House was ablaze with light. No one inside the mansion thought to pull the window shades or institute blackouts on the first day of war -- that would came later. An Associated Press photographer took a picture from Lafayette Park. It shows a window in the family dining room with a silhouette of a tall figure -- probably the First Lady -- presiding over her scrambled eggs.

During the dinner, White House chief usher Howell Crim asked Murrow to remain for an informal meeting with FDR. After Janet Murrow returned to their hotel, her husband went to the second floor and waited outside Roosevelt's Oval Study -- not to be confused with the Oval Office -- in the West Wing of the White House. Soon Murrow was joined by William "Wild Bill" Donovan, Roosevelt's Coordinator of Information and later founder of the wartime Office of Strategic Services, the forerunner of the CIA.

Donovan had not been present at dinner but had been summoned by the President from New York, where he had been watching a football game at the Polo Grounds. Football fans heard an unusual announcement over the public address system about 2:30 that afternoon: "Colonel William Donovan, come to the box office at once. There is an important phone message." The message was from James Roosevelt, the President's son and a member of Donovan's staff; he told Donovan about the Japanese attack.

Throughout the evening of December 7, Roosevelt conferred with congressional and military leaders. He decided his first wartime move would come the next morning, December 8, when he would ask Congress to declare that a state of war existed between Japan and the United States. He prepared a rough draft of what later became his "Day of Infamy" speech. Then he invited Murrow and Donovan into the study for a midnight snack of sandwiches and cold beer. Chief Usher Crim noted that the three men spent twenty-five minutes together in the study before Roosevelt retired to his adjoining bedroom. Crim's arrival and departure notations in the Usher Book comprise the only official record; there were no official minutes of the meeting.

Only Donovan has hinted at what went on: the conversation was mostly about public reaction to the attack. He sensed that this was FDR's overriding concern. In 1953, while he served as ambassador to Thailand, Donovan disclosed the details of the meeting to his executive assistant, William J. vanden Heuvel, who summarized the recollections in his diary. The President asked Murrow and Donovan whether they thought the attack was a clear case of a first Japanese move that would unite Americans behind a declaration of war against the Axis powers. Both guests thought it would indeed have that effect.

Donovan believed that Roosevelt welcomed the attack and that it was less of a surprise to him than it was to others in the White House. FDR claimed he sent an advance warning to Pearl Harbor that an attack by Japan was imminent. "They caught our ships like lame ducks! Lame ducks, Bill. We told them, at Pearl Harbor and everywhere else, to have the lookouts manned. But they still took us by surprise."

Still not convinced that America's isolationist sentiments would change after this attack, FDR then read to the two men from a message he had received from a British Foreign Office official, T. North Whitehead: "The dictator powers have presented us with a united America." Roosevelt wondered whether Whitehead's assessment was correct. Again he asked, would America now support a declaration of war? Donovan and Murrow again replied in the affirmative.

Whitehead was an influential member of the Foreign Office and an advisor to Prime Minister Winston Churchill on matters affecting America's aid to the British in 1940 and 1941. He evaluated American public opinion and "read" FDR's mind for the Prime Minister. In written comments to Churchill in the fall of 1940, Whitehead had warned of continued United States isolationism, but predicted it could be overcome: "America is not in the bag. However, the President is engaged in carefully calculated steps to give us full assistance."

Several years later Murrow made a brief, circumspect broadcast that in part addressed the question of what the President had known before the Japanese hit Pearl Harbor. According to Murrow's biographer Ann Sperber, "The broadcast itself was a response to an article by John Chamberlain in LIFE magazine charging Roosevelt with foreknowledge of the attack. Murrow did not believe it and said so on the air, making it clear that he had only his instinct to go on."

In the end, Murrow's big story remained unwritten and unbroadcast. Sperber believed that the meeting concerned damage reports. Whatever it was, it weighed heavily on Murrow's mind. "But he couldn't forget it either, blaming himself at times thereafter for not going with the story, never determining to his satisfaction where his duties lay that night or what had been in the subtle mind of FDR," Sperber wrote. Murrow took the story to his grave. He died April 7, 1965, two days past his fifty-seventh birthday.

Had FDR revealed something that night about his foreknowledge? Damage reports emerged immediately in local Hawaii papers, though the full details of the American losses were not released to the nation's news media until December 16, 1941, by Secretary of the Navy Frank Knox. He confirmed the initial report by the Honolulu Star-Bulletin. Secretary Knox named the seven warships sunk: USS Arizona, USS Utah, USS Oklahoma, USS Cassin, USS Downes, USS Shaw, and USS Oglala. He said the human toll on Oahu was 2897 Americans killed, 879 wounded, and 26 missing. There was severe damage to the Army's aircraft and hangars on Oahu. Knox said the Japanese planes came from aircraft carriers and had the "most tremendously detailed" information of the naval layout at Pearl Harbor. He listed Japan's losses at forty-one planes shot down, and disclosed the American capture of a Japanese two-man midget submarine that had gone aground on an Oahu beach and the sinking of four other Japanese midget subs.

Once the nation's news media reported the attack details on December 16, 1941, there was no "big story" left to report on the main events at Pearl Harbor. None -- except speculation about Roosevelt's foreknowledge. Certain words and phrases cited by Donovan hinted at what he and Murrow were told by FDR. William vanden Heuvel's diary, according to author Anthony Cave Brown, is tantalizing: "The President's surprise was not as great as that of other men around him. Nor was the attack unwelcome. It had ended the past months of uncertainty caused by FDR's decision that Japan must be seen to make the first overt move."

Any conclusion about the Murrow meeting must remain speculative, because the participants refused to tell the story. However, there are many more direct pieces of evidence from the days and weeks leading up to December 7 that put the question of FDR's foreknowledge definitively to rest. Previous accounts have claimed that the United States had not cracked Japanese military codes prior to the attack. We now know this is wrong. Previous accounts have insisted that the Japanese fleet maintained strict radio silence. This, too, is wrong. The truth is clear: FDR knew.

The real question is even more intriguing: did he deliberately provoke the attack? Were there earlier covert moves by the United States? According to a secret strategy memo, dated October 7, 1940, and adopted by the President, there were.

In Day of Deceit, Robert Stinnett delivers the definitive final chapter on America's greatest secret and our worst military disaster.

Drawing on twenty years of research and access to scores of previously classified documents, Stinnett proves that Pearl Harbor was not an accident, a mere failure of American intelligence, or a brilliant Japanese military coup. By showing that ample warning of the attack was on FDR's desk and, furthermore, that a plan to push Japan into war was initiated at the highest levels of the U.S. government, he ends up profoundly altering our understanding of one of the most significant events in American history.

Day Of Deceit: The Truth About FDR and Pearl Harbor Paperback