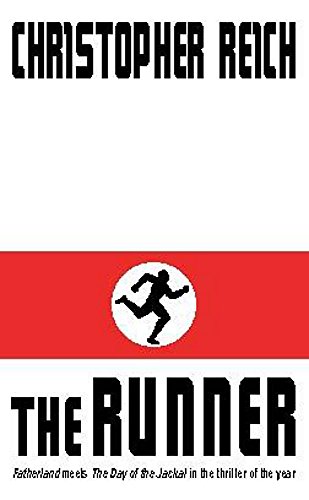 'An original and highly inventive thriller' Mail on Sunday

'THE RUNNER is a wonderful novel, a sophisticated story of conspiracy, treachery and political intrigue populated by larger-than-life characters. Reich evokes the fascinating world that existed between the hot war and the cold war - he is a master of atmosphere and detail' Nelson DeMille, bestselling author of PLUM ISLAND and THE LION'S GAME

'Reich, whose first novel NUMBERED ACCOUNT (1998) met with critical and popular success, presents a new work that's equally consuming... His intimate knowledge of international intrigue presents the reader with a genuine insider's look at historical diplomacy, reminiscent of le Carre. There should be big demand for this one' Booklist

'A thriller that takes your breath away' Northern Echo

'A fast-paced, tightly written, exciting thriller that has an excellent, powerful plot and a great hook that really grabs you' South Wales Argus

'This is thriller writing on a grand scale...like Jack Higgins of Frederick Forsyth. It is to Reich's credit that he gives the White Lion character traits that make it easy to understand why his fellow Germans admire him and are willing to help him in his escape and mission' Denver Post

'Reich...makes it work so well as both a countdown and a revenge thriller. It also has one of the most audacious twists ever tacked on to the end of an already satisying story. Reich's debut novel, NUMBERED ACCOUNT, was a critical and commercial success, and this promises more of the same. It has the same combination of suspense, atmosphere, sharply etched characters and historical juncture. Extremely entertaining.' Showtime

At the end of World War Two Erich Seyss, former SS officer and Olympic sprinter, known as 'The White Lion', is being held in an American POW camp awaiting a war crimes trial that he knows will see him hanged. Using all his ruthless skill as a trained killer, Seyss escapes, finding refuge with a shadowy organisation of former Nazis who plan to use his unique expertise in a breathtaking plot - a conspiracy that could change the destiny of Europe. Pursuing Seyss with furious determination is Devlin Judge, an American lawyer whose brother, an Amercian GI, was shot by Seyss in the last days of the war. With Seyss now on the loose, Devlin must find him at all costs - not only to avenge his brother, but to prevent a catastrophe of horrifying proportions.

Description du livre Etat : Very Good. Shipped within 24 hours from our UK warehouse. Clean, undamaged book with no damage to pages and minimal wear to the cover. Spine still tight, in very good condition. Remember if you are not happy, you are covered by our 100% money back guarantee. N° de réf. du vendeur 6545-9780747272588

Description du livre Etat : Very Good. This book is in very good condition and will be shipped within 24 hours of ordering. The cover may have some limited signs of wear but the pages are clean, intact and the spine remains undamaged. This book has clearly been well maintained and looked after thus far. Money back guarantee if you are not satisfied. See all our books here, order more than 1 book and get discounted shipping. . N° de réf. du vendeur 7719-9780747272588

Description du livre Soft cover. Etat : Good. 1st Edition. Set in Germany just after the WWII surrender, The Runner stars ace Nazi Olympic runner Erich Seyss, who as an SS man has performed untold atrocities--including the murder, in a massacre of unarmed American soldiers, of hero Devlin Judge's brother. That motivates Judge, a lawyer who is supposed to be prosecuting former Nazis at the War Crimes Tribunal, to drop everything and set off in hot pursuit of Seyss when he escapes from a POW camp. Seyss is no ordinary escapee, but is being groomed by a band of German arms industrialists who want to revive their shattered country by turning the Americans against the Russians. 377 p. ; 24 cm. Book. N° de réf. du vendeur 030597

Description du livre Paperback. Etat : Very Good. The book has been read, but is in excellent condition. Pages are intact and not marred by notes or highlighting. The spine remains undamaged. N° de réf. du vendeur GOR004114319