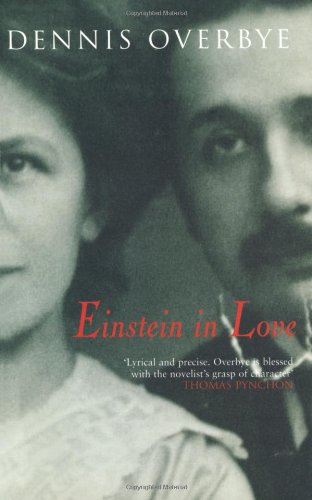 In Einstein in Love, Dennis Overbye has written the first profile of the great scientist to focus exclusively on his early adulthood, when his major discoveries were made. It reveals Einstein to be very much a young man of his time-draft dodger, self-styled bohemian, poet, violinist, and cocky, charismatic genius who left personal and professional chaos in his wake. Drawing upon hundreds of unpublished letters and a decade of research, Einstein in Love is a penetrating portrait of the modern era's most influential thinker.

Description du livre Bloomsbury Publishing PLC, 2003. Paperback. Etat : Used; Good. Dispatched, from the UK, within 48 hours of ordering. This book is in good condition but will show signs of previous ownership. Please expect some creasing to the spine and/or minor damage to the cover. Damaged cover. The cover of is slightly damaged for instance a torn or bent corner. N° de réf. du vendeur CHL6194326

Description du livre Bloomsbury Pub Ltd, 2003. Paperback. Etat : Very Good. The book has been read, but is in excellent condition. Pages are intact and not marred by notes or highlighting. The spine remains undamaged. N° de réf. du vendeur GOR004204407

Description du livre Bloomsbury Publishing PLC, 2003. Paperback. Etat : Good. All orders are dispatched the following working day from our UK warehouse. Established in 2004, we have over 500,000 books in stock. No quibble refund if not completely satisfied. N° de réf. du vendeur mon0005441267

Description du livre Bloomsbury Publishing PLC, 2003. Paperback. Etat : Used; Good. **SHIPPED FROM UK** We believe you will be completely satisfied with our quick and reliable service. All orders are dispatched as swiftly as possible! Buy with confidence!. N° de réf. du vendeur 1614736

Description du livre Bloomsbury Publishing PLC, 2003. Paperback. Etat : Very Good. WE ARE PROCESSING ORDERS AS NORMAL DURING THIS VIRUS EPIDEMIC, ALL ITEMS ARE SENT BY ROYAL MAIL. DISPATCHED FROM THE UK WITHIN 24 HOURS ( BOOKS ORDERED OVER THE WEEKEND DISPATCHED ON MONDAY) BY ROYAL MAIL. ALL OVERSEAS ORDERS SENT BY AIR MAIL. WE ALSO ACCEPT PAYMENT IN US DOLLARS OR EURO BY BANK TRANSFER. N° de réf. du vendeur mon0000692521

Description du livre Bloomsbury Publishing PLC, UK, 2003. Softcover. Etat : Very Good. First Edition. 432 pages. Available Now. Book Description: While the world hailed Einstein's genius, his private life was collapsing around him. His marriage to the beautiful, tormented Mileva had failed and he had launched into affairs with a string of comely young women. But at its height, Einstein's and Mileva's marriage had been an extraordinary one - a colleague and often fierce adversary, Mileva had been brilliantly matched with the scientific genius, pillow talking relativity and quantum mysticism with him. In Einstein in Love, Dennis Overbye presents this greatest of scientific romances in a vivid new light, telling the private story of a young man - a sly firebrand who left personal and professional chaos in his wake - who changed the way we view reality. Separating the man from the myth, this revelatory biography restores humanity, individuality and nuance to the most iconic figure in the scientific pantheon. : Amazon Review: In his first book, Lonely Hearts of the Cosmos, New York Times science writer Dennis Overbye humanized the formidable intellects who have probed the inner workings of the universe. With Einstein in Love, he takes on the most formidable intellect of all--and the result does justice to a complicated man and his equally complicated work. Overbye's narrative concentrates on the years between 1896 (when the 17-year-old Einstein arrived in Zurich to study physics) and 1919 (when he used measurements of light deflection during a solar eclipse to support his new theory of relativity thus beginning a reign as the 20th century's most famous scientist). It's no accident this period begins with Einstein meeting fellow student Mileva Maric, who would become his first wife, and closes with his second marriage. Physics was not all Einstein's life, writes Overbye. He lived on Earth with a belly and a heart. Accordingly, Einstein in Love depicts a young man who liked to hike, play the violin, flirt and tell dirty jokes. Albert and Mileva had a child before they were married (Michelle Zackheim's popular 1999 book, Einstein's Daughter, attempted to unravel the mystery of Lieserl's fate), and the young father was as careless of convention in his dress and grooming as in his scientific work. Indeed, although Overbye nicely captures Einstein's personality, the real excitement comes in those chapters delineating his thought. The book effortlessly incorporates a capsule history of physics from the Greeks to the Victorians, both laying out the issues with which Einstein grappled and suggesting just why his solutions were so revolutionary. Even those with little grounding in science will easily grasp why Einstein's ideas made such an impact, not just on fellow physicists, but on a populace that at the dawn of the 20th century was ready to accept the demise of all the old certainties. As usual, Overbye's work is a model of science writing for the general reader; it's also a perceptive biography highlighting Einstein's most creative years. --Wendy Smith -- : Review: 'A superb account' -- Literary Review: 'Far more than a biography . it allows us to experience the evolution of great science' -- Independent: 'Lyrical and compelling' -- Sunday Telegraph: 'Lyrical and precise. Overbye is blessed with the novelist's grasp of character' -- Thomas Pynchon: 'Uplifting and gripping' -- Mail on Sunday Size: 12.9 x 19.8 x 2.7 cm. 432 pages. Multiple copies available this title. Quantity Available: 2. Shipped Weight: Under 1 kilogram. Category: Biography & Autobiography; Paperback; ISBN: 0747561699. ISBN/EAN: 9780747561699. Inventory No: B242-1008. 23 years of serving customers on ABE. A seller you can rely on. N° de réf. du vendeur B242-1008