Harry Potter and the Half-blood Prince 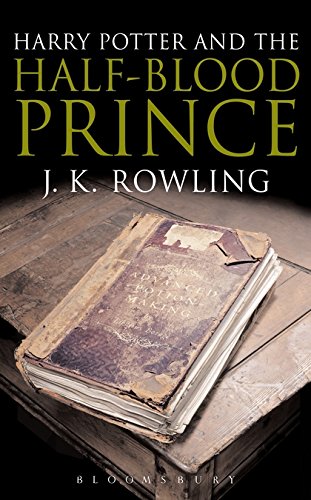 J. K. Rowling is the author of six celebrated novels in the Harry Potter sequence. Her most recent book, Harry Potter and the Order of the Phoenix, was named an ALA Notable Book and recognized with prizes as diverse as an Anthony Award for Best Young Adult Mystery and a Best Science Fiction/Fantasy Novel Award from Disney Adventures magazine. She has also been named an Officer of the Order of the British Empire. Ms. Rowling lives in Scotland with her family.

Jim Dale is the voice of all the characters in the Harry Potter audiobook series. This work has won him a Grammy® Award (2000), three Grammy nominations and three Audie Awards. A Member of the Order of the British Empire, Mr. Dale has also won a Tony Award®, four Drama Desk Awards and an Academy Award® nomination. Visit Jim at www.jim-dale.com.
From the Compact Disc edition.

A gripping story with its clues trailed through the text, chills, spills and some excellent, new comic characters. There is a measure of sadness too . . . one of the elements of Rowling's writing that I think entitles her to a seat in the pantheon --(Julian Fellowes Sunday Telegraph)

The most remarkable publishing sensation for a generation . . . the story is told with such momentum, imagination and irrepressible humour that it can captivate both adults and children --(Daily Express)

Funny, imaginative, magical . . . Rowling has woken up a whole generation to reading. In the 2020s, thirty-something book-lovers will know each other by smug references to Diagon Alley and Quidditch --(The Times)

HARRY POTTER AND THE HALF-BLOOD

Description du livre Hardcover. Etat : New. Etat de la jaquette : New. First (1st) Edition. Book is in MINT Unread condirion . Very early first edition with misprint on Page 99, Line 9, says "eleven" instead of "ten" O.W.L.s . Comes with extremely rare Launch date (16/07/05) Bloomsbury Promotion Bag . Front/Back: New . Spine: New . Pages: White no discolouring at all . Printing: 1 . Year 2005 This Book in my opinion is in the best condition A+++ much better than any other copy of the book I have had from the launch date!. 0. N° de réf. du vendeur 1745T