The Little Friend: 21 Great Bloomsbury Reads for the 21st Century 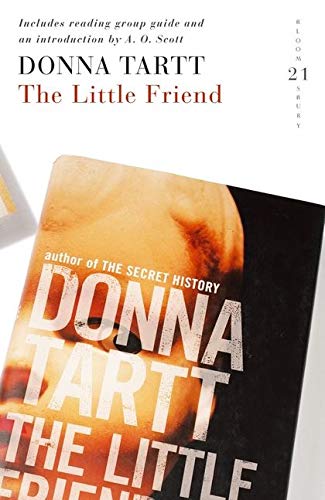 For the rest of her life, Charlotte Cleve would blame herself for her son’s death because she had decided to have the Mother’s Day dinner at six in the evening instead of noon, after church, which is when the Cleves usually had it. Dissatisfaction had been expressed by the elder Cleves at the new arrangement; and while this mainly had to do with suspicion of innovation, on principle, Charlotte felt that she should have paid attention to the undercurrent of grumbling, that it had been a slight but ominous warning of what was to come; a warning which, though obscure even in hindsight, was perhaps as good as any we can ever hope to receive in this life.

Though the Cleves loved to recount among themselves even the minor events of their family history–repeating word for word, with stylized narrative and rhetorical interruptions, entire death-bed scenes, or marriage proposals that had occurred a hundred years before–the events of this terrible Mother’s Day were never discussed. They were not discussed even in covert groups of two, brought together by a long car trip or by insomnia in a late-night kitchen; and this was unusual, because these family discussions were how the Cleves made sense of the world. Even the cruelest and most random disasters–the death, by fire, of one of Charlotte’s infant cousins; the hunting accident in which Charlotte’s uncle had died while she was still in grammar school–were constantly rehearsed among them, her grandmother’s gentle voice and her mother’s stern one merging harmoniously with her grandfather’s baritone and the babble of her aunts, and certain ornamental bits, improvised by daring soloists, eagerly seized upon and elaborated by the chorus, until finally, by group effort, they arrived together at a single song; a song which was then memorized, and sung by the entire company again and again, which slowly eroded memory and came to take the place of truth: the angry fireman, failing in his efforts to resuscitate the tiny body, transmuted sweetly into a weeping one; the moping bird dog, puzzled for several weeks by her master’s death, recast as the grief-stricken Queenie of family legend, who searched relentlessly for her beloved throughout the house and howled, inconsolable, in her pen all night; who barked in joyous welcome whenever the dear ghost approached in the yard, a ghost that only she could perceive. “Dogs can see things that we can’t,” Charlotte’s aunt Tat always intoned, on cue, at the proper moment in the story. She was something of a mystic and the ghost was her innovation.

But Robin: their dear little Robs. More than ten years later, his death remained an agony; there was no glossing any detail; its horror was not subject to repair or permutation by any of the narrative devices that the Cleves knew. And–since this willful amnesia had kept Robin’s death from being translated into that sweet old family vernacular which smoothed even the bitterest mysteries into comfortable, comprehensible form–the memory of that day’s events had a chaotic, fragmented quality, bright mirror-shards of nightmare which flared at the smell of wisteria, the creaking of a clothes-line, a certain stormy cast of spring light.
From the Hardcover edition.

The second novel by Donna Tartt,  bestselling author of The Goldfinch (winner of the 2014 Pulitzer Prize),  The Little Friend  is a grandly ambitious and utterly riveting novel of childhood, innocence and evil.

The setting is Alexandria, Mississippi, where one Mother’s Day a little boy named Robin Cleve Dufresnes was found hanging from a tree in his parents’ yard. Twelve years later Robin’s murder is still unsolved and his family remains devastated. So it is that Robin’s sister Harriet—unnervingly bright, insufferably determined, and unduly influenced by the fiction of Kipling and Robert Louis Stevenson--sets out to unmask his killer. Aided only by her worshipful friend Hely, Harriet crosses her town’s rigid lines of race and caste and burrows deep into her family’s history of loss. Filled with hairpin turns of plot and “a bustling, ridiculous humanity worthy of Dickens” ( The New York Times Book Review), The Little Friend is a work of myriad enchantments by a writer of prodigious talent.

Description du livre Paperback. Etat : Used; Good. Dispatched, from the UK, within 48 hours of ordering. This book is in good condition but will show signs of previous ownership. Please expect some creasing to the spine and/or minor damage to the cover. N° de réf. du vendeur CHL1108321

Description du livre Paperback. Etat : Fair. A readable copy of the book which may include some defects such as highlighting and notes. Cover and pages may be creased and show discolouration. N° de réf. du vendeur GOR002755503

Description du livre Paperback. Etat : Very Good. All orders are dispatched the following working day from our UK warehouse. Established in 2004, we have over 500,000 books in stock. No quibble refund if not completely satisfied. N° de réf. du vendeur mon0005716023

Description du livre Paperback. Etat : Good. All orders are dispatched the following working day from our UK warehouse. Established in 2004, we have over 500,000 books in stock. No quibble refund if not completely satisfied. N° de réf. du vendeur mon0005874058

Description du livre Paperback. Etat : Very Good. Twelve-year-old Harriet is doing her best to grow up, which is not easy as her mother is permanently on medication, her father has moved to another city, and her sister rarely notices anything. All of them are still suffering from the shocking and mysterious death of her brother Robin twelve years earlier, and it seems to Harriet that the family may never recover. Inspired by Houdini, and Robert Louis Stevenson, she sets out with her only friend Hely to find Robin's murderer and punish him. But what starts out as a child's game soon becomes a dark and dangerous journey into the menacing underworld of a small Mississippi town. The book has been read, but is in excellent condition. Pages are intact and not marred by notes or highlighting. The spine remains undamaged. N° de réf. du vendeur GOR001196959

Description du livre Etat : Very Good. This book is in very good condition and will be shipped within 24 hours of ordering. The cover may have some limited signs of wear but the pages are clean, intact and the spine remains undamaged. This book has clearly been well maintained and looked after thus far. Money back guarantee if you are not satisfied. See all our books here, order more than 1 book and get discounted shipping. . N° de réf. du vendeur 7719-9780747590064

Description du livre Paperback. Etat : Very Good. Shipped within 24 hours from our UK warehouse. Clean, undamaged book with no damage to pages and minimal wear to the cover. Spine still tight, in very good condition. Remember if you are not happy, you are covered by our 100% money back guarantee. N° de réf. du vendeur 6545-9780747590064