Articles liés ŕ Nothing But the Truth: My Story

Pattison, Vicky Nothing But the Truth: My Story 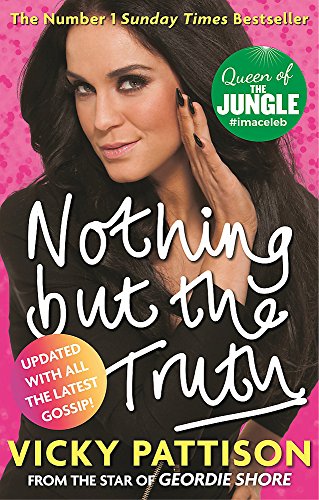 Vicky Pattison always had big dreams, but four years ago she was working in a call centre in Newcastle and those dreams looked like they might never come true. Could a new reality series, Geordie Shore, be the big break she had been waiting for? Chosen from among thousands of hopefuls to take part in the controversial show, outspoken and outrageous Vicky was an immediate hit. Finally she was on her way to becoming a star ...Living your life on screen isn't always easy, however, and Vicky soon found herself struggling to cope: her relationship was toxic, her weight ballooning and her self-esteem in tatters. It looked like the glamorous and confident Vicky Pattison everyone knew was gone for good. But you can't keep a good Geordie girl down and now, for the first time, Vicky will reveal how she has turned her life around - and dish the dirt on what really goes on in the Geordie Shore house. And Vicky's not afraid to turn the spotlight on herself, exposing the sensitive soul underneath her famously tough exterior and speaking frankly about her battle with her weight, her run-ins with the law and the painful truth about her tempestuous relationship with castmate Ricci. It's time for Vicky Pattison to tell the truth, the whole truth and NOTHING BUT THE TRUTH.

Vicky Pattison's autobiography, Nothing but the Truth, was a Number One Sunday Times bestseller in hardback and remained in the Top Ten for seven weeks. Vicky's first two novels, All that Glitters and A Christmas Kiss, received rave reviews from her fans who fell in love with the witty one-liners and snappy comebacks Vicky is renowned for. Her second non-fiction book, The Real Me, was a fully illustrated peek into Vicky's world that included recipes, exercise plans and all Vicky's top fashion and beauty tips. She discovered a new love of fitness and launched her own range of vitamins supplements called Mini V with phenomenal success and was boosted by her chart topping fitness DVD, Vicky's 7-Day Slim. In 2015, Vicky won the nation's hearts and was crowned Queen of the Jungle in I'm a Celebrity... Get Me Out of Here. Since then, Vicky has been a regular panellist on Loose Women as well as presenting the I'm a Celebrity spin-off show on ITV2. Vicky has also been named as a team captain for the new panel show Virtually Famous on E4. Vicky is a genuine Geordie Girl, born and bred in Newcastle. Her third novel, My Sister's Wedding, is out on 15th June 2017.

The explosive autobiography from the outspoken star of Geordie Shore.

Vicky Pattison was an ordinary Geordie girl, working in a call centre but dreaming of fame and fortune. Four years and seven series of the hit MTV reality series Geordie Shore later, she has more than a million Twitter followers and can't walk down the street of her hometown without being mobbed by fans. And now, for the first time, Vicky will dish the dirt on what really goes on in the Geordie Shore house and, with her trademark honesty, reveal what she really thinks of her castmates . . . and her exes.

Always outrageous and outspoken, Vicky won't hold back when it comes to revealing the truth behind the show's most scandalous moments. And she's not afraid to turn the spotlight on herself either, exposing the sensitive soul underneath her famously tough exterior, and speaking frankly about her self-esteem issues, her battle with her weight and the painful truth about her tempestuous relationship with castmate Ricci.

This is the sensational tell-all autobiography that all Geordie Shore fans have been waiting for!

Description du livre Paperback. Etat : Very Good. The book has been read, but is in excellent condition. Pages are intact and not marred by notes or highlighting. The spine remains undamaged. N° de réf. du vendeur GOR006393706

Description du livre Paperback. Etat : Good. The book has been read but remains in clean condition. All pages are intact and the cover is intact. Some minor wear to the spine. N° de réf. du vendeur GOR006548755

Description du livre Paperback. Etat : Used; Good. Dispatched, from the UK, within 48 hours of ordering. This book is in good condition but will show signs of previous ownership. Please expect some creasing to the spine and/or minor damage to the cover. Grubby book may have mild dirt or some staining, mostly on the edges of pages. N° de réf. du vendeur CHL5462162

Description du livre Etat : Very Good. This book is in very good condition and will be shipped within 24 hours of ordering. The cover may have some limited signs of wear but the pages are clean, intact and the spine remains undamaged. This book has clearly been well maintained and looked after thus far. Money back guarantee if you are not satisfied. See all our books here, order more than 1 book and get discounted shipping. . N° de réf. du vendeur 7719-9780751557008

Description du livre Etat : Very Good. Shipped within 24 hours from our UK warehouse. Clean, undamaged book with no damage to pages and minimal wear to the cover. Spine still tight, in very good condition. Remember if you are not happy, you are covered by our 100% money back guarantee. N° de réf. du vendeur 6545-9780751557008

Description du livre Etat : Good. Will be shipped promptly from UK warehouse. Book is in good condition with no missing pages, no damage or soiling and tight spine. There may be some dog-eared pages showing previous use but overall a great book. N° de réf. du vendeur 9053-9780751557008

Nothing but the Truth