Articles liés ŕ Military Blunders: The How and Why of Military Failure

David, Saul Military Blunders: The How and Why of Military Failure

Military Blunders: The How and Why of Military Failure 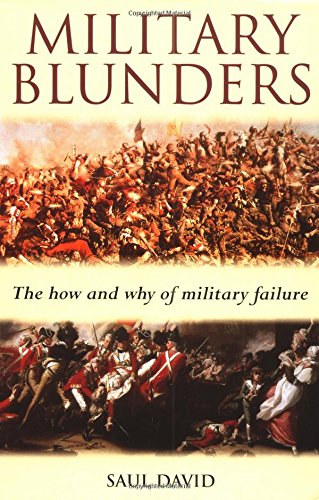 Saul David is Professor of War Studies at the University of Buckingham and the author of several critically-acclaimed history books, including The Indian Mutiny: 1857 (shortlisted for the Westminster Medal for Military Literature), Zulu: The Heroism and Tragedy of the Zulu War of 1879 (a Waterstone's Military History Book of the Year) and, most recently, Victoria's Wars: The Rise of Empire. Saul David also writes acclaimed historical fiction. Zulu Hart, the first in the George Hart series, was a bestseller in 2009, and the sequel, Hart of Empire, will be published in August 2010. An experienced broadcaster, Saul David has presented and appeared in history programmes for all the major TV channels and is a regular contributor to Radio 4.

Retelling the most spectacular cock - ups in military history, this graphic account has a great deal to say about the psychology of military incompetence and the reasons even the most well - oiled military machines inflict disaster upon themselves. Beginning in AD9 with the massacre of Varus and his legions in the Black Forest all the way up to present day conflict in Afghanistan, it analyses why things go wrong on the battlefield and who is to blame.

MILITARY BLUNDERS: THE HOW AND W