Articles liés ŕ It's Kind of a Funny Story

Vizzini, Ned It's Kind of a Funny Story

It's Kind of a Funny Story 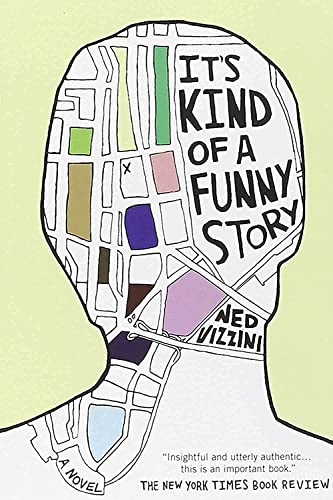 It's Kind of a Funny Story The author of "Be More Chill" takes a poignant look at teenage depression in this remarkably moving and authentic picture of the physicality, the despair, and even the hilarity of depression.

Like many ambitious New York City teenagers, Craig Gilner sees entry into Manhattan's Executive Pre-Professional High School as the ticket to his future. Determined to succeed at life-which means getting into the right high school to get into the right college to get the right job-Craig studies night and day to ace the entrance exam, and does. That's when things start to get crazy.

At his new school, Craig realizes that he isn't brilliant compared to the other kids; he's just average, and maybe not even that. He soon sees his once-perfect future crumbling away. The stress becomes unbearable and Craig stops eating and sleeping-until, one night, he nearly kills himself.

Craig's suicidal episode gets him checked into a mental hospital, where his new neighbors include a transsexual sex addict, a girl who has scarred her own face with scissors, and the self-elected President Armelio. There, isolated from the crushing pressures of school and friends, Craig is finally able to confront the sources of his anxiety.

Ned Vizzini, who himself spent time in a psychiatric hospital, has created a remarkably moving tale about the sometimes unexpected road to happiness. For a novel about depression, it's definitely a funny story.

Ned Vizzini began writing for The New York Press at the age of fifteen. At nineteen, he had his first book published, Teen Angst? Naaah?. Ned is also the author of Be More Chill, the first young adult novel ever chosen as a Today Show Book Club pick, as well as one of Entertainment Weekly's Top Ten Books for 2004. Ned lives in Brooklyn, New York.

3. It's Kind of a Funny Story (Paperback or Softback)

7. Its Kind of a Funny Story

8. Its Kind of a Funny Story

9. Its Kind of a Funny Story