Baldwin, James Just above my head

Just above my head 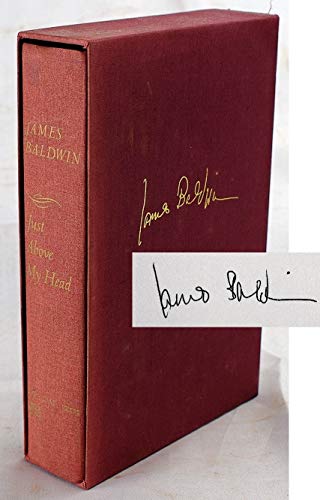 The telephone call did not go into these details, neither did the telegram: urgently demanding my arrival because my brother was dead. The laconic British press merely noted that a "nearly forgotten Negro moaner and groaner" (this is how the British press described my brother) had been found dead in a men's room in the basement of a London pub. No one told me how he died. The American press noted the passing of an "emotion-filled" gospel singer, dead at the untidy age of thirty-nine.

He had been losing his hair, that rain forest of Senegalese hair, I knew that. Jimmy had not been with him; Jimmy had been waiting for him in Paris, to bring him home. Julia had been clearing up their rooms in her house in Yonkers.

The sun was shining that morning, like I've never known the sun to shine before.

Oh. No. Arthur. I think I laughed. I think I couldn't cry. My brother.

The house was empty. Ruth was out shopping, Tony and Odessa were at school: it was a Thursday morning.

My brother. Do you know, friend, how a brother loves his brother, how mighty, how unanswerable it is to be confronted with the truth beneath that simple word? Simple. Word. Yes. No. Everything becomes unanswerable, unreadable, in the face of an event yet more unimaginable than one's own death. It is one's death, occurring far beyond the confines of one's imagination. Or, surely, far beyond the confines of my imagination. And do you know, do you know, how much my brother loved me? how much he loved me! And do you know I did not know it? did not dare to know it: do you know? No. No. No.

I did not cry. Nothing came out of me, not even water. I stood, as dumb and naked as a horse, under the shower. I dried myself, and I shaved--very very slowly, very very carefully: I was shaving someone else. I looked into my eyes: they were someone else's eyes. I combed my hair. The phone did not ring. Soon I would have to pick it up and dial a number and get on a plane. London Bridge is falling down. My fair lady.

Ruth found me naked, flat on my back, on the bathroom floor, my razor in my hand: and the phone was ringing.

Two years ago: if Arthur were alive now, he would be approaching forty-one. I am the older brother, and I will be forty-eight this year.

Our father, Paul, died several years back--died, I think, from having crossed a continent to find himself in New York. He had been born in Tallahassee, grew up in New Orleans, and had had a rough, rough time in California. He died, anyway, while Arthur was still Arthur, thank God; he split the scene before Arthur started down. Florence, our mother, once Arthur was in the ground, went back to New Orleans--where she and Paul had met--and she's staying there now, with one of her younger sisters. Ruth, and myself, and the kids try to make it down there for a couple of weeks every summer, and sometimes I bring Mama up here, for Christmas. But she doesn't like it up here. Maybe she never did--but now, when she visits, I can feel her flinching. She doesn't say anything, the pain is at the very bottom of her eyes. I catch it sometimes, when she's just sitting still, looking at television or looking out of the window, or sometimes, when she's walking along the street. She doesn't like to go to church up here. She says that the people don't have any spirit, that their religion ain't nothing but noise and show: they've lost the true religion. That may be true. I don't go to church myself. But even if what she says is true, and I remember, too, how these people treated Arthur when he branched out from gospel, that's not the reason. Any church up here might have Jesus on the main line all day and all night long, and Mama would never so lower herself as to go anywhere near that phone. No, never. She doesn't like this city because it robbed her of her son, and she feels that the people in the church, when they turned against him, became directly responsible for his death. She goes to church down home, though, where she can grieve and pray, away from all the spiteful people whose tongues so lacerated her boy. She can sing to herself, without fear of being mocked, and find strength and solace in the song that says, They didn't know who you were. And she's not singing about Jesus, then, she's singing about her son. Maybe all gospel songs begin out of blasphemy and presumption--what the church would call blasphemy and presumption: out of entering God's suffering and challenging God Almighty to have or to give or to withhold mercy. There will be two of us at the mercy seat: my Lord, and I!

Two years ago: and I have never really talked about it: not to Ruth, not to my children, Tony and Odessa (who love their uncle), not to Julia, not to Jimmy: and they can't talk about it until I can talk.

I know I'm wrong to trap them in my silence. Maybe it's partly because I was Arthur's manager. I had to talk about him for years, living, and then, dead, as a property, as a star: I had to protect him because Lord have mercy that nappy-headed mother did not know how to protect himself. That made me afraid that I'd lose him as my brother: that he would think that I also thought of him as the can of beans anybody could buy and which everybody sold--and down the river, baby, at a mighty handsome profit.

I don't think that he thought of me that way. I know he didn't. If he had, he would have died much sooner. I know it because I know that he never tried to hide anything from me, though sometimes, he tried to protect me, too. I know I loved him, and he knew it; with all my heart, I loved him; even when he made me so mad sometimes that I felt like I wanted to beat his brains out. He made his life so hard! Well. That's not true, either. He lived the life he lived, like anybody, I guess, and he paid his dues, like everybody. Maybe what I mean when I say he made his life so hard was that he always tried to pay his dues in front. That isn't always possible: it can even be called a bad habit. Maybe some dues are paid. Some dues may be just a bad memory; but you can't really take that for granted unless you can trust your memory. The truth, anyway, is that I wouldn't really give a shit about all these abstract speculations if I weren't trying to talk about my brother. He was on stage. He caught the light, and so I saw him: more clearly than I will ever see myself.

"If Van Gogh was our 19th-century artist-saint, James Baldwin is our 20th-century one."
--Michael Ondaatje

"The work of a born storyteller at the height of his powers...  glimpses of family life in Harlem, rapturous music-making in the churches, moments of uneasiness in even the most casual meetings between whites and blacks--scenes that Baldwin seems preternaturally gifted in understanding."
--The New York Times Book Review

"A fine novel...it seems impossible for [Baldwin] to write with anything other than eloquence.  His great and peculiar power is to re-create the maddening halfway house that the black man finds himself in late-twentieth-century America."
--The New Yorker

1. Just above my head

2. Just above my head

3. JUST ABOVE MY HEAD

4. Just above my head Baldwin, James