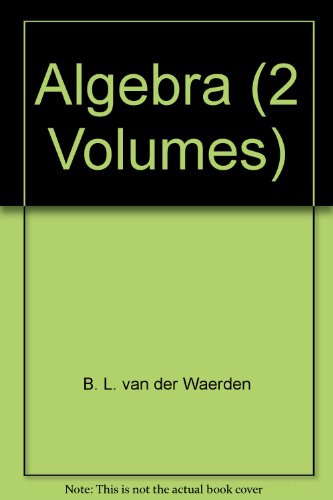 This widely known textbook, formally titled Modern Algebra, by the noted Dutch mathematician van der Waerden is now back in print. Algebra originated from notes taken by the author from Emil Artin's lectures. The author extended the scope of these notes to include research of Emmy Noether and her students. The first German edition appeared in 1930-1931, with subsequent editions having been brought up to date. "The basic notions of algebra, groups, rings, modules, fields, and the main theories pertaining to these notions are treated in the classical two volume textbook of van der Waerden. Although more than half a century has elapsed since the appearance of this remarkable book, it is in no way dated, and for the majority of the questions it treats, no better source can be found even today." #I.R. Shafarevich: Encyclopaedia of Mathematical Sciences, Volume 11.1990#1

Description du livre Ungar, 1970. Hardcover. Etat : Very Good. Etat de la jaquette : Good. with the insights of Emil Artin, Emmy Noether; one of the historically first Modern Algebra titles; introductory level; Van der Waerden at Goettingen, >1924; with good jackets; I found two each handwritten notes in V-1; V-2 is very clean and its 265 pages are very newish; the hard linen covers - one (1) gray, one (2) navy,- are very attractive, and with minimal wear; there is B O L D white lettering on the spine; I ship now and I ship anywhere you like; N° de réf. du vendeur 002630