Musically Speaking: A Life Through Song 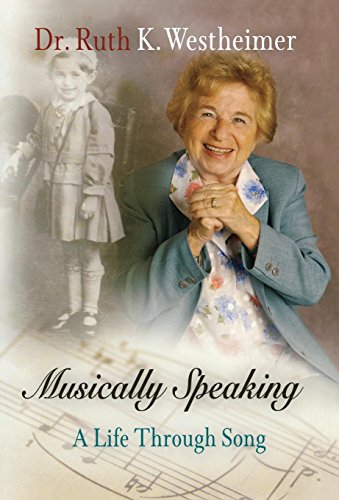 2. Musically Speaking: A Life Through Song (Hardback or Cased Book)

Description du livre University of Pennsylvania Press, United States, 2003. Hardback. Etat : New. New. Language: English. Brand new Book. "Music, I have come to realize, is for me a kind of golden thread running through my life. It has helped maintain my connection with the past that otherwise might have been severed by catastrophe and time. I am often asked-indeed, I often wonder myself-why it is that I should always have had such joie de vivre in the face of the losses and dislocations I had to endure in my early years. The answer I always gave was that the warmth and security of my early childhood had a remarkable power and influence. This is certainly true. But now I have realized that there is another part to the answer. And that is music."-from the introductionWho among us does not have a song that triggers vivid memories-of jubilation, of belonging, of sorrow, of love? In Musically Speaking, Dr. Ruth K. Westheimer, one of America's most beloved personalities, has written a warm and contemplative book about the role music has played in her life and the ineradicable traces it has left on her thoughts, emotions, her very being.In this memoir through song, Dr. Ruth invites us to share her story from a uniquely musical perspective. By the time she was thirty, Ruth Westheimer had lived in five countries, each with a distinctive musical culture, each with a different hold on her sensibility. For the first ten years of her life, the comforting melodies of childhood helped drown out the anthems of Nazism to be heard elsewhere in her native Germany; as an adolescent refugee in Switzerland, she came to be aware that, however loudly she sang the patriotic songs of the land that gave her shelter, she could never truly be at home there.Present at the creation of the modern state of Israel, she sang and danced to the new music of a new nation; as a young woman eagerly absorbing all that Paris had to offer in the way of romance and worldliness in the early 1950s, the songs of Edith Piaf, Mouloudji, and Yves Montand were her tutors. An almost accidental emigration to America brought new challenges and new stability, as she became a wife, mother, and professional; tremendous and unforeseen celebrity came later, and with it the giddy opportunity to indulge her love of music as never before.Always, the classical repertoire of Mozart, Haydn, Beethoven, and Brahms has drawn Westheimer to a German culture that has belonged-and not belonged-to her throughout her life. And always, the music of the Jewish tradition has given her strength and comfort beyond words.Affording a view of Dr. Ruth from a rare private vantage point, Musically Speaking offers wondrous testimony to the resilience of the human spirit. This is a book full of color, verve, humor, and wisdom, unfolding gracefully through the beloved music of the Jewish holidays, the lullabies of childhood, the songs that sustained an orphan and roused the courage of a young woman, the melodies that enable a widow grieving for her husband to recall, from deep within the years of love, companionship, and happiness. N° de réf. du vendeur APC9780812237467

7. Musically Speaking: A Life Through Song