Articles liés ŕ The Man of My Dreams: A Novel

Sittenfeld, Curtis The Man of My Dreams: A Novel

The Man of My Dreams: A Novel 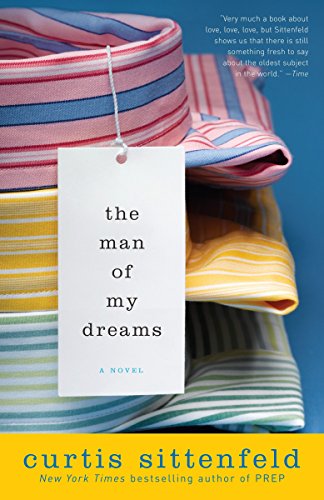 julia roberts is getting married. It’s true: Her dress will be an eight-thousand-dollar custom-made two-piece gown from the Tyler Trafficante West Hollywood salon, and at the reception following the ceremony, she’ll be able to pull off the train and the long part of the skirt to dance. The bridesmaids’ dresses will be sea-foam green, and their shoes (Manolo Blahnik, $425 a pair) will be dyed to match. The bridesmaids themselves will be Julia’s agents (she has two), her makeup artist, and a friend who’s also an actress, though no one has ever heard of her. The cake will be four-tiered, with violets and sea-foam ribbons of icing.

“What I want to know is where’s our invitation?” Elizabeth says. “Did it get lost in the mail?” Elizabeth—Hannah’s aunt—is standing by the bed folding laundry while Hannah sits on the floor, reading aloud from the magazine. “And who’s her fiancé again?”

“Kiefer Sutherland,” Hannah says. “They met on the set of Flatliners.”

“He’s okay.” Actually, he is cute—he has blond stubble and, even better, one blue eye and one green eye—but Hannah is reluctant to reveal her taste; maybe it’s bad.

“Let’s see him,” Elizabeth says, and Hannah holds up the magazine. “Ehh,” Elizabeth says. “He’s adequate.” This makes Hannah think of Darrach. Hannah arrived in Pittsburgh a week ago, while Darrach—he is Elizabeth’ s husband, Hannah’s uncle—was on the road. The evening Darrach got home, after Hannah set the table for dinner and prepared the salad, Darrach said, “You must stay with us forever, Hannah.” Also that night, Darrach yelled from the second-floor bathroom, “Elizabeth, this place is a bloody disaster. Hannah will think we’re barn animals.” He proceeded to get on his knees and start scrubbing. Yes, the tub was grimy, but Hannah couldn’t believe it. She has never seen her own father wipe a counter, change a sheet, or take out trash. And here was Darrach on the floor after he’d just returned from seventeen hours of driving. But the thing about Darrach is—he’s ugly. He’s really ugly. His teeth are brownish and angled in all directions, and he has wild eyebrows, long and wiry and as wayward as his teeth, and he has a tiny ponytail. He’s tall and lanky and his accent is nice—he’s from Ireland—but still. If Elizabeth considers Kiefer Sutherland only adequate, what does she think of her own husband?

“You know what let’s do?” Elizabeth says. She is holding up two socks, both white but clearly different lengths. She shrugs, seemingly to herself, then rolls the socks into a ball and tosses them toward the folded pile. “Let’s have a party for Julia. Wedding cake, cucumber sandwiches with the crusts cut off. We’ll toast to her happiness. Sparkling cider for all.”

“What?” Elizabeth says. “You don’t like the idea? I know Julia herself won’t show up.”

When Elizabeth laughs, she opens her mouth so wide that the fillings in her molars are visible. “Hannah,” she says, “I’m not nuts. I realize a celebrity won’t come to my house just because I invited her.”

“I didn’t think that,” Hannah says. “I knew what you meant.” But this is not entirely true; Hannah cannot completely read her aunt. Elizabeth has always been a presence in Hannah’s life— Hannah has a memory of herself at age six, riding in the backseat of Elizabeth’s car as Elizabeth sang “You’re So Vain” quite loudly and enthusiastically along with the radio—but for the most part, Elizabeth has been a distant presence. Though Hannah’s father and Elizabeth are each other’ s only siblings, their two families have not gotten together in years. Staying now in Elizabeth’s house, Hannah realizes how little she knows of her aunt. The primary information she has always associated with Elizabeth was acquired so long ago she cannot even remember learning it: that once, soon after Elizabeth became a nurse, a patient left her a great deal of money and Elizabeth squandered it. She spent it on an enormous party, though there was no occasion, not even her birthday. And she’s been struggling to make ends meet ever since. (Hannah has been surprised to find, however, that her aunt orders takeout, usually Chinese, on the nights Darrach is gone, which is at least half the time. They don’t exactly act like they’re struggling to make ends meet.) It didn’t help, financially speaking, that Elizabeth married a truck driver: the Irish hippie, as Hannah’s father calls him. When she was nine, Hannah asked her mother what hippie meant, and her mother said, “It’s someone fond of the counterculture.” When Hannah asked her sister—Allison is three years older—she said, “It means Darrach doesn’t take showers,” which Hannah has observed to be untrue.

“Would we have our party before or after the wedding?” Hannah asks. “She gets married on June fourteenth.” Then, imagining it must appear on the invitations like this, all spelled out in swirly writing, she adds, “Nineteen hundred and ninety-one.”

“Why not on the fourteenth? Darrach can be my date, if he’s here, and Rory can be yours.”

Hannah feels a stab of disappointment. Of course her date will be her eight-year-old retarded cousin. (That’s the final piece in the puzzle of Elizabeth’s financial downfall, according to Hannah’s father: that Rory was born with Down’s. The day of Rory’s birth, her father said to her mother, as he stood in the kitchen after work flipping through mail, “They’ll be supporting that child all the way to their graves.”) But what did Hannah think Elizabeth was going to say? Your date will be the sixteen-year-old son of one of my coworkers. He is very handsome, and he’ll like you immediately. Sure, Hannah expected that. She always thinks a boy for her to love will fall from the sky.

“I wish I could find my wedding dress for you to wear at our party,” Elizabeth says. “I wouldn’t be able to fit my big toe in it at this point, but you’d look real cute. Lord only knows what I did with it, though.”

How can Elizabeth not know where her wedding dress is? That’s not like losing a scarf. Back in Philadelphia, Hannah’s mother’s wedding dress is stored in the attic in a long padded box, like a coffin.

“I gotta put the other load in the dryer,” Elizabeth says. “Coming?”

Hannah stands, still holding the magazine. “Kiefer bought her a tattoo,” she says. “It’s a red heart with the Chinese symbol that means ‘strength of heart.’ ”

“In other words,” Elizabeth says, “he said to her, ‘As a sign of my love, you get to be poked repeatedly by a needle with ink in it.’ Do we really trust this guy?” They are on the first floor, cutting through the kitchen to the basement steps. “And do I dare ask where the tattoo is located?”

“It’s on her left shoulder. Darrach doesn’t have any tattoos, does he? Even though that’s, like, a stereotype of truck drivers?” Is this a rude question?

“None he’s told me about,” Elizabeth says. She appears unoffended. “Then again, most truck drivers probably aren’t tofu eaters or yoga fanatics.”

Yesterday Darrach showed Hannah his rig, which he keeps in the driveway; the trailers he uses are owned by the companies he drives for. Darrach’s current route is from here in Pittsburgh, where he picks up axles, to Crowley, Louisiana, where he delivers the axles and picks up sugar, to Flagstaff, Arizona, where he delivers the sugar and picks up women’s slips to bring back to Pittsburgh. The other night Darrach let Rory demonstrate how to turn the front seat around to get in the sleeper cab. Then Darrach pointed out the bunk where he meditates. During this tour, Rory was giddy. “It’s my dad’s,” he told Hannah several times, gesturing widely. Apparently, the rig is one of Rory’s obsessions; the other is his bus driver’s new puppy. Rory has not actually seen the puppy, but discussion is under way about Elizabeth taking Rory this weekend to visit the bus driver’s farm. Watching her cousin in the rig, Hannah wondered if his adoration of his parents would remain pure. Perhaps his Down’ s will freeze their love.

After Elizabeth has moved the wet clothes into the dryer, they climb the basement steps. In the living room, Elizabeth flings herself onto the couch, sets her feet on the table, and sighs noisily. “So what’s our plan?” she says. “Darrach and Rory shouldn’t be back from errands for at least an hour. I’m taking suggestions.”

“Being raised in an unstable household makes you understand that the world doesn’t exist to accommodate you, which, in Hannah’s observation, is something a lot of people struggle to understand well into adulthood.”–from The Man of My Dreams

In her acclaimed debut novel, Prep, Curtis Sittenfeld created a touchstone with her pitch-perfect portrayal of adolescence. Her prose is as intensely realistic and compelling as ever in The Man of My Dreams, a disarmingly candid and sympathetic novel about the collision of a young woman’s fantasies of family and love with the challenges and realities of adult life.

Hannah Gavener is fourteen in the summer of 1991. In the magazines she reads, celebrities plan elaborate weddings; in Hannah’s own life, her parents’ marriage is crumbling. And somewhere in between these two extremes–just maybe–lie the answers to love’s most bewildering questions. But over the next decade and a half, as she moves from Philadelphia to Boston to Albuquerque, Hannah finds that the questions become more rather than less complicated: At what point can you no longer blame your adult failures on your messed-up childhood? Is settling for someone who’s not your soul mate an act of maturity or an admission of defeat? And if you move to another state for a guy who might not love you back, are you being plucky–or just pathetic?

None of the relationships in Hannah’s life are without complications. There’s her father, whose stubbornness Hannah realizes she’s unfortunately inherited; her gorgeous cousin, Fig, whose misbehavior alternately intrigues and irritates Hannah; Henry, whom Hannah first falls for in college, while he’s dating Fig; and the boyfriends who love her more or less than she deserves, who adore her or break her heart. By the time she’s in her late twenties, Hannah has finally figured out what she wants most–but she doesn’t yet know whether she’ll find the courage to go after it.

Full of honesty and humor, The Man of My Dreams is an unnervingly insightful and beautifully written examination of the outside forces and personal choices that make us who we are.