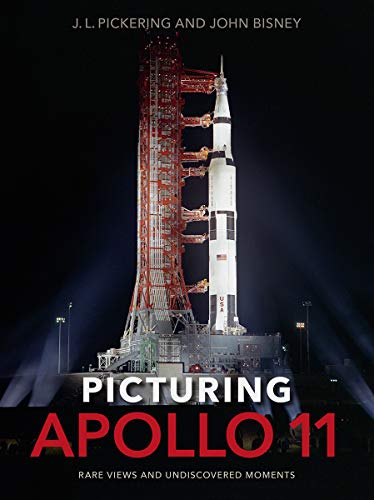 Picturing Apollo 11 is an unprecedented photographic history of the space mission that defined an era. Through a wealth of unpublicized and recently discovered images, this book presents new and rarely-seen views of the people, places, and events involved in the pioneering first moon landing of July 20, 1969. No other book has showcased as many never-before-seen photos connected with Apollo 11, or as many photos covering the activities from months before to years after the mission. Starting with the extensive preparations, these photographs show astronauts Neil Armstrong, Michael Collins, and Buzz Aldrin training for the flight, as well as the stages of the massive Saturn V rocket arriving at the Kennedy Space Center for assembly. They capture the media frenzy over the unfolding story and the "moon fever" that gripped the nation. Also featured here are shots of incredible moments from the mission. In these images, spectators flock to Cape Canaveral. The rocket launches in a cloud of fire and thunder. Armstrong and Aldrin step out of the lunar module Eagle onto the surface of the moon. The command module Columbia splashes down in the Pacific Ocean, and the extraordinary voyage is celebrated around the world and in the following decades. Most of the photographs were selected from NASA archives and the collection of J. L. Pickering, the world's largest private collection of U.S. human space flight images. The accompanying text details the scenes, revealing the astonishing scale and scope of activities that went into planning and executing the first moon landing. This book commemorates the historic mission and evokes the electric atmosphere of the time.

"50 years ago this July, Neil Armstrong took 'one giant leap for mankind' as he became the first human to step foot on the moon's surface--and now, never-before-seen pictures provide a unique glimpse behind the profound 1969 voyage."--Daily Mail "In a story told primarily through photos and captions, historian Pickering and journalist Bisney (coauthors of Moonshots and Snapshots of Project Apollo), chronicle 1969's heady days of 'moon fever.' Across 10 well-organized chapters, the selected images capture the country's mounting excitement; the meticulous preparation of astronauts Buzz Aldrin, Neil Armstrong, and Michael Collins; and finally the moon landing itself and the crew's return to Earth. Subjects range from the magnificent--the Apollo 11 rocket at sunset or twilight on the launching pad--to the mundane--the astronauts signing rental car forms at a NASA base. Some of the most affecting images are simple portraits of Aldrin, Armstrong, and Collins, which amply capture their discipline and determination. In the introduction, Bisney notes that he and Pickering don't claim to include any new material from space, as all 'in-flight photography' has been publicly available since 1969; NASA buffs familiar with such images may find fresh interest in, for instance, those of the astronauts enduring a 21-day isolation period after their return and then being feted around the world. The reader is left with an ample sense of the astronauts' fame and, thanks to Pickering and Bisney's wise selections, of their lasting accomplishment." --Publishers Weekly

Description du livre Hardcover. Etat : New. Hardcover. Picturing Apollo 11 is an unprecedented photographic history of the space mission that defined an era. Through a wealth of unpublicized and recently discovered images, this book presents n.Shipping may be from multiple locations in the US or from the UK, depending on stock availability. 272 pages. 1.397. N° de réf. du vendeur 9780813056173