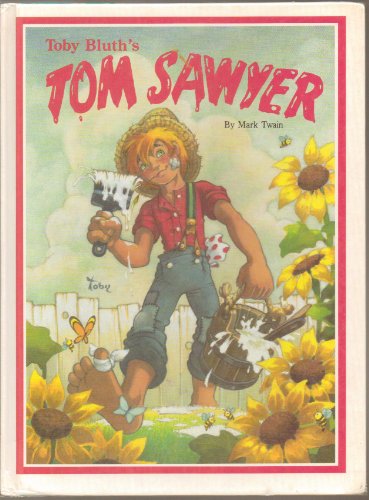 "What's gone with that boy, I wonder? You TOM!"

The old lady pulled her spectacles down and looked over them, about the room; then she put them up and looked out under them. She seldom or never looked through them for so small a thing as a boy; they were her state pair, the pride of her heart, and were built for "style," not service;-she could have seen through a pair of stove lids just as well. She looked perplexed for a moment, and then said, not fiercely, but still loud enough for the furniture to hear:

She did not finish, for by this time she was bending down and punching under the bed with the broom-and so she needed breath to punctuate the punches with. She resurrected nothing but the cat.

"I never did see the beat of that boy!"

She went to the open door and stood in it and looked out among the tomato vines and "jimpson" weeds that constituted the garden. No Tom. So she lifted up her voice, at an angle calculated for distance, and shouted:

There was a slight noise behind her and she turned just in time to seize a small boy by the slack of his roundabout and arrest his flight.

"There! I might 'a' thought of that closet. What you been doing in there?"

"Nothing! Look at your hands. And look at your mouth. What is that truck?"

"Well I know. It's jam--that's what it is. Forty times I've said if you didn't let that jam alone I'd skin you. Hand me that switch."

The switch hovered in the air-the peril was desperate-

The old lady whirled around, and snatched her skirts out of danger. The lad fled, on the instant, scrambled up the high board fence, and disappeared over it.

His aunt Polly stood surprised a moment, and then broke into a gentle laugh.

"Hang the boy, can't I never learn anything? Ain't he played me tricks enough like that for me to be looking out for him by this time? But old fools is the biggest fools there is. Can't learn an old dog new tricks, as the saying is. But my goodness, he never plays them alike, two days, and how is a body to know what's coming? He 'pears to know just how long he can torment me before I get my dander up, and he knows if he can make out to put me off for a minute or make me laugh, it's all down again and I can't hit him a lick. I ain't doing my duty by that boy, and that's the Lord's truth, goodness knows. Spare the rod and spile the child, as the Good Book says. I'm a-laying up sin and suffering for us both, I know. He's full of the Old Scratch, but laws-a-me! he's my own dead sister's boy, poor thing, and I ain't got the heart to lash him, somehow. Every time I let him off my conscience does hurt me so, and every time I hit him my old heart most breaks. Well-a-well, man that is born of woman is of few days and full of trouble, as the Scripture says, and I reckon it's so. He'll play hookey this evening, and I'll just be obleeged to make him work, to-morrow, to punish him. It's mighty hard to make him work Saturdays, when all the boys is having holiday, but he hates work more than he hates anything else, and I've got to do some of my duty by him, or I'll be the ruination of the child."

Tom did play hookey, and he had a very good time. He got back home barely in season to help Jim, the small colored boy, saw next day's wood and split the kindlings, before supper-at least he was there in time to tell his adventures to Jim while Jim did three-fourths of the work. Tom's younger brother, (or rather, half-brother) Sid, was already through with his part of the work (picking up chips,) for he was a quiet boy and had no adventurous, troublesome ways.

While Tom was eating his supper, and stealing sugar as opportunity offered, aunt Polly asked him questions that were full of guile, and very deep-for she wanted to trap him into damaging revealments. Like many other simple-hearted souls, it was her pet vanity to believe she was endowed with a talent for dark and mysterious diplomacy and she loved to contemplate her most transparent devices as marvels of low cunning. Said she:

"Tom, it was middling warm in school, warn't it?"

A bit of a scare shot through Tom--a touch of uncomfortable suspicion. He searched aunt Polly's face, but it told him nothing. So he said:

The old lady reached out her hand and felt Tom's shirt, and said:

"But you ain't too warm now, though." And it flattered her to reflect that she had discovered that the shirt was dry without anybody knowing that that was what she had in her mind. But in spite of her, Tom knew where the wind lay, now. So he forestalled what might be the next move:

"Some of us pumped on our heads--mine's damp yet. See?"

Aunt Polly was vexed to think she had overlooked that bit of circumstantial evidence, and missed a trick. Then she had a new inspiration:

"Tom, you didn't have to undo your shirt collar where I sewed it to pump on your head, did you? Unbutton your jacket!"

The trouble vanished out of Tom's face. He opened his jacket. His shirt collar was securely sewed.

"Bother! Well, go 'long with you. I'd made sure you'd played hookey and been a-swimming. But I forgive ye, Tom. I reckon you're a kind of a singed cat, as the saying is--better'n you look. This time."

She was half sorry her sagacity had miscarried, and half glad that Tom had stumbled into obedient conduct for once.

"Well, now, if I didn't think you sewed his collar with white thread, but it's black."

But Tom did not wait for the rest. As he went out at the door he said:

In a safe place Tom examined two large needles which were thrust into the lappels of his jacket, and had thread bound about them--one needle carried white thread and the other black. He said:

He was not the Model Boy of the village. He knew the model boy very well though--and loathed him.

Within two minutes, or even less, he had forgotten all his troubles. Not because his troubles were one whit less heavy and bitter to him than a man's are to a man, but because a new and powerful interest bore them down and drove them out of his mind for the time--just as men's misfortunes are forgotten in the excitement of new enterprises. This new interest was a valued novelty in whistling, which he had just acquired from a negro, and he was suffering to practice it undisturbed. It consisted in a peculiar bird-like turn, a sort of liquid warble, produced by touching the tongue to the roof of the mouth at short intervals in the midst of the music-the reader probably remembers how to do it if he has ever been a boy. Diligence and attention soon gave him the knack of it, and he strode down the street with his mouth full of harmony and his soul full of gratitude. He felt much as an astronomer feels who has discovered a new planet. No doubt, as far as strong, deep, unalloyed pleasure is concerned, the advantage was with the boy, not the astronomer.

The summer evenings were long. It was not dark, yet. Presently Tom checked his whistle. A stranger was before him--a boy a shade larger than himself. A new-comer of any age or either sex was an impressive curiosity in the poor little shabby village of St. Petersburg. This boy was well dressed, too-well dressed on a week-day. This was simply astounding. His cap was a dainty thing, his close-buttoned blue cloth roundabout was new and natty, and so were his pantaloons. He had shoes on--and yet it was only Friday. He even wore a necktie, a bright bit of ribbon. He had a citified air about him that ate into Tom's vitals. The more Tom stared at the splendid marvel, the higher he turned up his nose at his finery and the shabbier and shabbier his own outfit seemed to him to grow. Neither boy spoke. If one moved, the other moved--but only sidewise, in a circle; they kept face to face and eye to eye all the time. Finally Tom said:

An uncomfortable pause. Then Tom said:

"Tisn't any of your business, maybe."

"Oh, you think you're mighty smart, don't you? I could lick you with one hand tied behind me, if I wanted to."

"You can lump that hat if you don't like it. I dare you to knock it off--and anybody that'll take a dare will suck eggs."

"You're a fighting liar and dasn't take it up."

"Say--if you gimme much more of your sass I'll take and bounce a rock off'n your head."

Another pause, and more eyeing and sidling around each other. Presently they were shoulde...

The classic boy-hero of American literature.

Impish, daring young Tom Sawyer is the bane of the old, the hero of the young. There were some in his dusty old Mississippi town who believed he would be President, if he escaped a hanging. For wherever there is mischief or adventure, Tom is at the heart of it. During one hot summer, Tom witnesses a murder, runs away to be a pirate, attends his own funeral, rescues an innocent man from the gallows, searches for treasure in a haunted house, foils a devilish plot and discovers a box of gold. But can he escape his nemesis, the villainous Injun Joe?