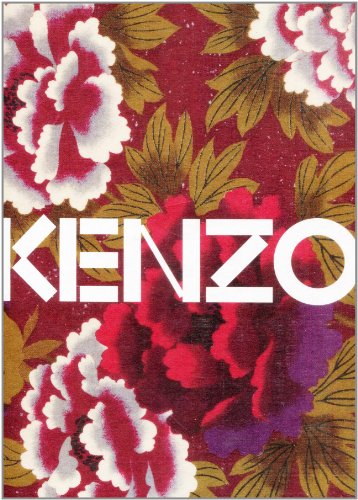 "There are few books that can be described as exquisite, let alone informative, and yet this celebration is all of that and more... unlike anything this reviewer has ever seen in any bookstore. The cloth-covered volume includes multi-page foldouts, several of which fold out to be poster sized. There is also one unbelievable pop-up rivaling even the most extravagant of art publication, 3-D art, on part with the most complicated of pop-ups of Ron Van Der Meer, Robert Sabuda, and David A. Carter. All of this is printed with crystal clear clarity on wonderfully thick stock that compares with the best in fine art books. These elements alone make this book a must have for anyone who can appreciate the art of fashion in all its unrestrained glory." ~New York Journal of Books

"In the book, KENZO (Rizzoli), the brand's signature East-meets-West style is presented in a fresh new way. The coffee-table tome celebrates the house's 40th anniversary with more than 300 pages of illustrations, personal accounts from designers and journalists, and pop-up pages commemorating its past, present and future. Keeping in line with KENZO's love of rich textiles, the book is covered and bound in a soft cloth: There are three different cover options in bold floral prints, each a work of art in itself." ~Nylon

“For the fashionista who has everything, a tome about KENZO penned by the label’s artistic Director Antonio Marras and by Olivier Saillard might just be the perfect gift...” ~Fashion Windows

An extraordinary collectible, Kenzo creatively presents forty years of the Paris-based fashion house, founded by Japanese designer Kenzo Takada and now in a resurgence under artistic director Antonio Marras. Established in 1970 by Kenzo Takada, who had arrived in Paris from Japan in 1965, Kenzo is one of the great French houses that transformed global fashion in the latter half of the twentieth century. Now under the artistic directorship of Antonio Marras, KENZO has again achieved critical and popular acclaim. Marras draws from the rich vein of Kenzo tradition as it engages the spirit of the new century. Armed with an unmatched vocabulary in prints and textiles, Marras mines both East and West, the present and the past, to create a collection that evokes, reveres, and reinvents the intentions of its founder. The highlights of Takada’s tenure until his retirement in 1999 are also documented here. The first monograph on KENZO, this lavish volume comes in a real fabric cover, available in three different patterns, and with a pop-up that evokes the romantic textiles, envelopes, and paper craft for which the house’s fashion collection invitations are known.  Additional special features include three double-sided double gatefolds, folding out to the equivalent of eight pages, and three accordian gatefolds, folding out to five pages.  This book is truly an art object in and of itself.