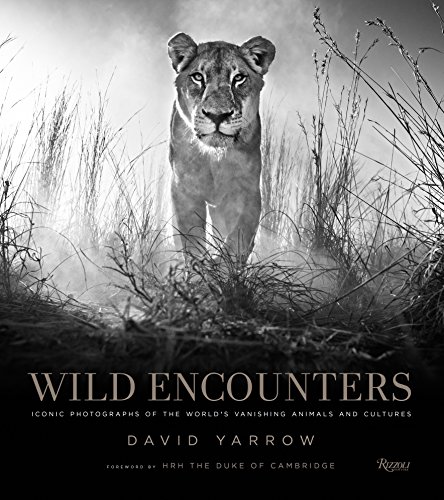 "David Yarrow is one of the virtuosos of black and white wildlife photography.  His art has graced galleries from Europe to North America. In this large format, portfolio-sized book, you’ll be treated to some of his finest work. Arranged by the latitude of locale, his dramatic monochromatic photographs of wild and endangered animals appear to leap from the page. Some of the most powerful images are tightly framed close-ups in which almost every hair of the animal can be seen. The emphasis of the book is on wildlife, but he also features people who live in close proximity with the creatures he photographs, and included among those are stunning portrayals of the Inuit in northern Canada and the stately Dinka people of the South Sudan. You won’t be disappointed. This is truly the work of an artist at the height of his powers."
—2017 National Outdoor Book Award Winner

"His book 'Wild Encounters' from New York’s Rizzoli publishing house was released last month and features work from seven continents with images of some of earth’s most-endangered species."
—Shutterbug Magazine

"Certainly, Wild Encounters is more than up-close wildlife photography, even though that is what stands out. . . . No matter the subject, however, Yarrow has captured what is wild and free and pulled us in for an unforgettable view."
—North American Nature Photography Association

“The Best 'Art Meets Science' Books of 2016. Scottish photographer Yarrow creates iconic images that have been shown in international galleries to great acclaim. With this collection, in large format, readers come face to face with the globe's most endangered and charismatic creatures. Portraits of favorites—lions, elephants and polar bears—renew again the emotional connection people have to these animals facing uncertain futures."
—Smithsonian Magazine

"David Yarrow’s Wild Encounters is a triumph of conservation photography. Yarrow is one of the best fine art photographers working in animal conservation today. His photographs render a kind of raw literacy to the truth of the vanishing wild. For his latest book Wild Encounters (Rizzoli; October 2016), he traveled to multiple continents, from the frozen Arctic to the African desert, to capture the most iconic animals through which we often define the natural world—lion, rhinoceros, and elephant, to name a few. His goal with the book, as with much of his work, was to push beyond the staid one-dimensional portraits that can be common with wildlife photography. The result is a triumph of both artistic mastery and emotional affect—a portfolio of compelling, visually arresting pictures that afford us the opportunity to fully grasp both the magnificence of animals in the wild, and the threats they face in a modern world."
— Sierra Magazine

"The haunting image of a female lion staring out from the cover of Wild Encounters: Iconic Photographs of the World’s Vanishing Animals and Cultures (Rizzoli, $75) conveys the immediacy of this volume of 160 photographs of the most vulnerable species and cultures around the world. Renowned wildlife photographer David Yarrow offers stunning and intimate images of elephants, lions, tigers, and bears in their native habitats across six continents, pulled from his two decades of experience in the field. This book clearly is driven by the author’s passion for conservation and highlights the real risks to the continued survival of these animals and their place on the planet. Beautiful and inspirational, this is a great gift book and a reminder of the wonder that can still be found in the world."
—Big Sky Journal

From big cats to elephants and indigenous communities, Wild Encounters is a must-have for nature lovers, conservationists, and anyone who is inspired by all that remains wild. David Yarrow travels from pole to pole and continent to continent to visit frozen Arctic tundras, vast African deserts, primordial rain forests, and remote villages, inviting us to truly connect with subjects we mistakenly think we have seen before. Yarrow takes the familiar—lions, elephants, tigers, polar bears—and makes it new again by creating iconic images that deliberately connect with us at a highly emotional level.  For more than two decades, this legendary wildlife photographer has been putting himself in harm's way to capture the most unbelievable close-up animal photography, amassing an incomparable photographic portfolio, spanning six continents. Driven by a passion for sharing and preserving Earth's last great wild cultures and species, Yarrow is as much a conservationist as a photographer and artist. His work has transcended wildlife photography and is now collected and shown as fine art in some of the most famed galleries around the world. Featuring 160 of his most breathtaking photographs, Wild Encounters offers a truly intimate view of some of the world's most compelling—and threatened—species and captures the splendor and very soul of what remains wild and free in our world through portraits that feel close enough to touch.

Description du livre Rizzoli International Publications, United States, 2017. Hardback. Etat : New. Language: English. Brand new Book. Capturing the splendor and very soul of what remains wild and free in our world through incredibly intimate-close enough to touch-portraits, Wild Encounters chronicles legendary photographer David Yarrow's photographic exploits in the field. Driven by a passion for sharing and preserving the Earth's last great wild cultures and species, Yarrow is as much a conservationist as a photographer and artist. His work has transcended wildlife photography, and is now collected and shown as fine art in some of the most famed galleries around the world. Yarrow goes Pole-to-Pole, continent-to-continent- mountain to tundra to primordial jungle-inviting us to truly connect with a subject that we mistakenly think we have seen before. Yarrow takes the familiar- lions, elephants, tigers, polar bears-and makes them new again by creating iconic images that deliberately connect with us at a highly emotional level. N° de réf. du vendeur AAJ9780847858323