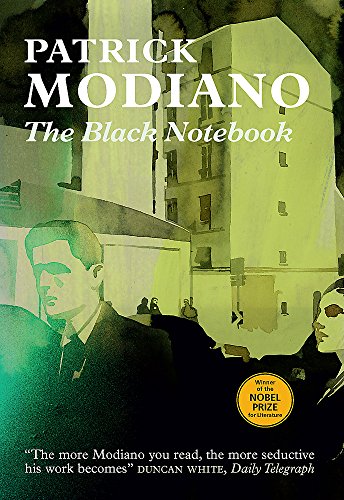 Never before has Modiano produced a novel as lyrical as this ... the Baroque excess and violence of his earlier works has given way to a more pared-down, modest style that is both intricately wrought and magnificently fluid, sustained by pure poetry (Denis Cosnard Le Monde)

1960's Paris, a mysterious girl, a group of shady characters, danger ... Modiano's folklore is set out from the beginning of The Black Notebook. And sheer magic follows once more (Nelly Kapričlian Vogue)

One can open this novel at any page, as if flicking through a collection of prose poems ... the smallest passage is enough to transport its reader. A rare, undefinable pleasure (Norbert Czarny Quinzaine Littéraire)

A compelling meditation on identity and memory, and an evocative portrait of [Paris] (The Lady 2017-01-20)

A writer's notebook becomes the key that unlocks memories of a love formed and lost in 1960s Paris. In the aftermath of Algeria's war of independence, Paris was a city rife with suspicion and barely suppressed violence. Amid this tension, Jean, a young writer adrift, met and fell for Dannie, an enigmatic woman fleeing a troubled past. A half century later, with his old black notebook as a guide, he retraces this fateful period in his life, recounting how, through Dannie, he became mixed up with a group of unsavory characters connected by a shadowy crime. Soon Jean, too, was a person of interest to the detective pursuing their case--a detective who would prove instrumental in revealing Dannie's darkest secret.    The Black Notebook bears all the hallmarks of this Nobel Prize–winning literary master's unsettling and intensely atmospheric style, rendered in English by acclaimed translator Mark Polizzotti ( Suspended Sentences). Once again, Modiano invites us into his unique world, a Paris infused with melancholy, uncertain danger, and the fading echoes of lost love.

The Black Notebook (Fiction in Translation)

Description du livre Hardcover. Etat : Good. Ex library copy with usual stamps/stickers Good condition is defined as: a copy that has been read but remains in clean condition. All of the pages are intact and the cover is intact and the spine may show signs of wear. The book may have minor markings which are not specifically mentioned. Most items will be dispatched the same or the next working day. N° de réf. du vendeur wbb0017525438

The Black Notebook (Fiction in Translation) (a first printing)