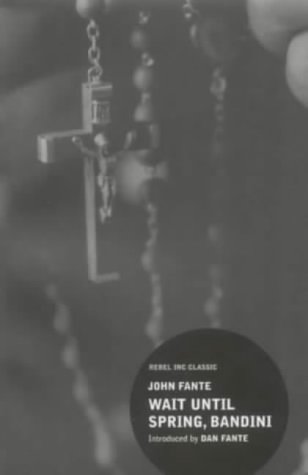 John Fante began writing in 1929 and published his first short story in 1932. His first novel, Wait Until Spring, Bandini, was published in 1938 and was the first of his Arturo Bandini series of novels, which also include The Road to Los Angeles and Ask the Dust. A prolific screenwriter, he was stricken with diabetes in 1955. Complications from the disease brought about his blindness in 1978 and, within two years, the amputation of both legs. He continued to write by dictation to his wife, Joyce, and published Dreams from Bunker Hill, the final installment of the Arturo Bandini series, in 1982. He died on May 8, 1983, at the age of seventy-four.

He came along, kicking the snow. Here was a disgusted man. His name was Svevo Bandini, and he lived three blocks down that street. He was cold and there were holes in his shoes. That morning he had patched the holes on the inside with pieces of cardboard from a macaroni box. The macaroni in that box was not paid for. He had thought of that as he placed the cardboard inside his shoes.

Description du livre Paperback. Etat : Very Good. The book has been read, but is in excellent condition. Pages are intact and not marred by notes or highlighting. The spine remains undamaged. N° de réf. du vendeur GOR001494622

Description du livre Paperback. Etat : Good. The book has been read but remains in clean condition. All pages are intact and the cover is intact. Some minor wear to the spine. N° de réf. du vendeur GOR005422583