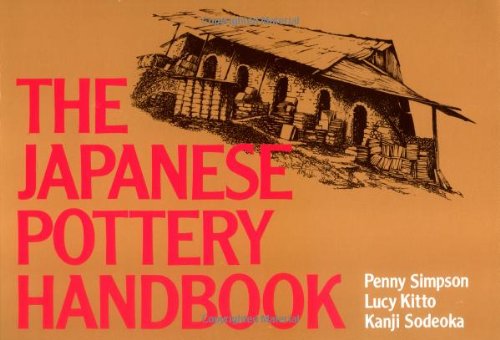 PENNY SIMPSON’s interest in making pots started when she was living in Japan in the 1970s. She studied pottery in Kyoto and explored many of the pottery-making areas of Japan before writing The Japanese Pottery Handbook, which Kodansha International published in 1979. Following her training at the renowned Dartington Pottery in the U.K., Simpson set up her own workshop in Devon, moving to her present location in Moretonhampstead in 1994. She enjoys cooking and making pots which enhance the pleasures of preparing and eating food. She also makes planters, tiles, and commissioned commemorative pieces. She sells her work from her own showroom and exhibits widely in the U.K. and abroad. LUCY KITTO learned to pot at a very young age at the Dartington Hall School under the tutelage of potter Bernard Forrester. In her early twenties, she travelled to Japan where she lived with Penny Simpson and attended the same pottery school. This was where they first saw the need for a book to support students studying ceramics in Japan. Since returning to England, Kitto has trained as a teacher, and is Art Coordinator at a school in Sheffield. KANJI SODEOKA was Penny Simpson’s first pottery teacher and collaborated with her on the original edition of The Japanese Pottery Handbook.

Everyone interested in pottery and crafts will find this practical guide a valuable addition to both bookshelf and workshop. Penny Simpson, an English potter living in Japan, and Kanji Sodeoka, her Japanese colleague, have compiled a step-by-step manual of the way pots are made in Japan, their forms, and their decorations. The authors give a thorough account of both traditional and modern techniques and also describe in detail tools, materials, glazes, and the setup of workshops and kilns. Lucy Kitto's lettering and sprightly drawings infuse each page with life and clarity. Pottery terms and expressions are listed with their Japanese equivalents, making it possible for the Western potter to arrive at a more intimate understanding of Japanese pottery and, when necessary, to communicate with Japanese potters in their own language. A godsend to potters, students, and collectors, this book will be especially welcome to the growing number of potters who come into direct contact with their Japanese counterparts either at home or in Japan.