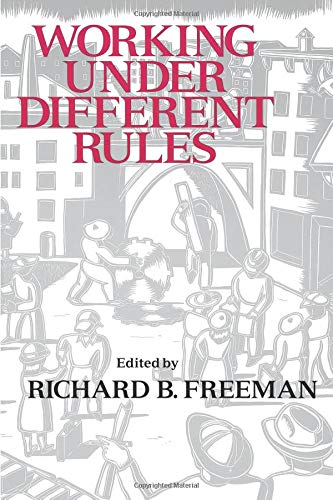 For much of the 20th century, American workers were the world's leaders in productivity, wages, and positive workplace conditions. American unions championed free enterprise and high labor standards, and American businesses dominated the world market. But, as editor Richard B. Freeman cautions in Working Under Different Rules, despite our relatively high standard of living we have fallen behind our major trading partners and competitors in providing good jobs at good pay—what was once considered "the American dream." Working Under Different Rules assesses the decline in the well-being of American workers—evidenced by spiraling income inequality and stagnant real earnings—and compares our employment and labor conditions with those of Western Europe, Canada, Japan, and Australia. As these original essays demonstrate, the modern U.S. labor market is characterized by a high degree of flexibility, with rapid employee turnover, ongoing creation of new jobs, and decentralized wage setting practices. But closer inspection reveals a troubling flip side to this adaptability in the form of inadequate job training, more frequent layoffs, and increased numbers of workers pushed to the very bottom of the income scale, into the low wage occupations where much of the recent job growth has occurred. While the variety of works councils prevalent throughout the developed world have done much to foster democratic rights and economic protection for employees, the virtually union-free environment emerging in many areas of the private U.S. economy has stripped workers of a strong collective voice. German apprenticeship programs and the Japanese system of "job rotation" represent more effective approaches to preparing workers for the changing demands of lifetime employment. In addition, workers in European advanced economies and in Canada have greater social protection than Americans. But while this has some cost in unemployment and higher taxes, carefully designed social safety nets do not seriously jeopardize economic efficiency. Working Under Different Rules is an illuminating analysis of the often complex interaction of market institutions, social policy, and economic results. The authors' up-to-date international assessment of unions, wage setting, apprenticeship programs, welfare support, and works councils suggests alternate ways of training, paying, and empowering workers that, if effectively adapted, could facilitate the growth of a healthier American economy and better prospects for American workers.