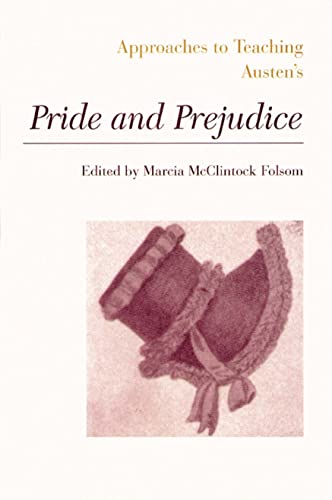 Description du livre Modern Language Association of America, United States, 1993. Paperback. Etat : New. Language: English. Brand new Book. Jane Austen's Pride and Prejudice is one of the most popular and widely taught works of English literature. Despite its enormous appeal--the novel has been in print almost continuously since its publication in 1812--there are few scholarly works devoted to teaching it. As Marcia McClintock Folsom notes in her introduction to Approaches to Teaching Austen's Pride and Prejudice, respondents to an MLA survey on teaching this Austen novel expressed the need for relevant background materials, brief reviews of criticism, and descriptions of pedagogical strategies This volume, like others in the MLA's Approaches to Teaching World Literature series, is divided into two parts. The first part, "Materials," reviews available editions of Pride and Prejudice and works of criticism. The section also includes a handy biographical chronology and a map. In the second part, "Approaches," sixteen teachers offer ideas for presenting the novel in the classroom, such as examining the social and economic conditions of late-eighteenth-century England; discussing biographical details, Austen's unpublished writing (e.g., her juvenilia and letters), and the influence of other works on her fiction; considering the structure and themes of the novel; and analyzing Austen's use of language. This collection is an indispensable resource for teachers of courses ranging from introductory literature surveys and continuing-education classes to graduate-level seminars. N° de réf. du vendeur BTE9780873527149