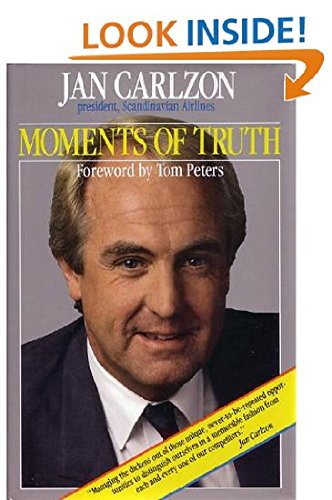 Jan Carlzon was born in Nykoping, Sweden, in 1941. After receiving his M.B.A. from the Stockholm School of Economics in 1967, he joined Vingresor, Sweden's largest tour operator, first as product manager and later as head of marketing. In 1974, when the package-tour business was in a tailspin because of the first energy crisis, he was named managing director of Vingresor at the age of 32 and soon reversed that company's economic decline. In 1978 he became managing director of Linjeflyg, Sweden's major domestic airline, and in 1981 he took command as resident and chief executive officer of SAS, the consortium of the national airlines of Denmark, Norway, and Sweden. At both Linjeflyg and SAS his leadership turned heavy economic losses into healthy profits within a year. Mr. Carlzon is frequently invited to give talks and interviews worldwide on leadership and customer-oriented business strategies.

The president and CEO of Scandinavia Airlines (SAS) shows how to adapt to the new customer-driven economy.