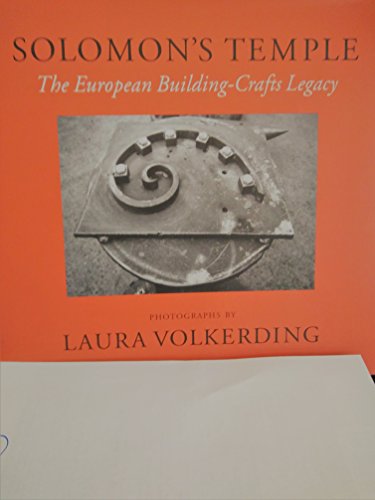 Description du livre Hardback. Etat : New. Language: English. Brand new Book. Laura Volkerding crisscrossed France over the past decade to photograph the wood, stone, and metal artifacts of a tradition that, legend has it, dates back to the construction of Solomon's Temple. In the luminous duotone images reproduced in this book, Volkerding explores the workshops, tools, and projects of an elite group of artisan-craftsmen, most of them members of the Compagnons du Devoir.Like the apprentice Compagnons, who tour workshops throughout France to acquire the secrets of their craft, Volkerding has, since the mid-1980s, undertaken her own tour de France, visiting the workshops and foundries of stone carvers, marble cutters, wood joiners and metalsmiths. She extended her coverage by photographing similar workshops in Spain, Greece, Italy, Tunisia, Canada, and the United States. Using a large-format view camera for the textural detail it reveals, she stands back from her subjects and allows the objects within the mostly unpeopled working spaces to reveal themselves through the natural light falling on them.Volkerding's meticulously composed images are meditations on the atmosphere of the workshops, concentrating on the arrangement of tools within them, on fragments of works in progress, and on aging reference drawings pinned to their walls. These photographs evoke a timeless serenity, yet they contain an undercurrent of surrealism arising from the artist's distinctive vision and the modern world's impact on the arcane secrets of an ancient tradition. N° de réf. du vendeur ART9780938262305

Description du livre Hardcover. Etat : New. Etat de la jaquette : New. Volkerding, Laura (photographer); 59 b/w Photographs (including Frontispiece & colophon); 6 b/w Figures (photographs) (illustrateur). First Edition. 4to - over 9¾" - 12" Tall (square). New in jacket. 131, [1] pages. Photo-documentation of the "wood, stone, and metal artifacts of a tradition that, legend has it, dates back to the construction of Solomon's Temple" (jacket front flyleaf), taken throughout France with the cooperation of the group of artisans known as the "Compagnons du Devoir". Also notable for the quotation from the writings of Auguste Rodin printed on front and rear endpapers. Preface by Terence Pitts; introduction by Richard Shiff; photographer's afterword; biographical chronology and a few bibliographical references. N° de réf. du vendeur L069120