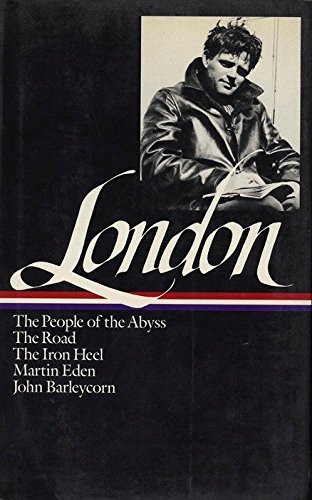 By turns an impoverished laborer, a renegade adventurer, a war correspondent in Mexico, a declared socialist, and a writer of enormous popularity the world over, Jack London was the author of brilliant works that reflect his ideas about twentieth-century capitalist societies while dramatizing them through incidents of adventure, romance, and brutal violence. His prose, always brisk and vigorous, rises in The People of the Abyss to italicized horror over the human degradations he saw in the slums of East London. It also accommodates the dazzling oratory of the hero of The Iron Heel, an American revolutionary named Ernest Everhard, whose speeches have the accents of some of London’s own political essays, like the piece (reprinted in this volume) entitled “Revolution.” London’s prophetic political vision was recalled by Leon Trotsky, who observed that when The Iron Heel first appeared, in 1907, not one of the revolutionary Marxists had yet fully imagined “the ominous perspective of the alliance between finance capitalism and labor aristocracy.”

Whether he is recollecting, in The Road, the exhilarating camaraderie of hobo gangs, or dramatizing, in Martin Eden, a life like his own, even to the foreshadowing of his own death at age forty, or confessing his struggles with alcoholism in the memoir John Barleycorn, London displays a genius for giving marginal life the aura of romance. Violence and brutality flash into life everywhere in his work, both as a condition of modern urban existence and as the inevitable reaction to it.

Though he is outraged in The People of the Abyss by the condition of the poor in capitalist societies, London is even more appalled by their submission, and in the novel he wrote immediately afterward, The Call of the Wild (in the companion volume, Novels and Stories), he constructed an animal fable about the necessary reversion to savagery. The Iron Heel, with its panoramic scenes of urban warfare in Chicago, envisions the United States taken over by fascists who perpetuate their regime for three hundred years. It constitutes London’s warning to his fellow socialists that mere persuasion is insufficient to combat a system that ultimately relies on force.

John Griffith "Jack" London (1876–1916) is an American author, journalist, and social activist. Some of his most famous works include The Call of the Wild and White Fang, as well as the short stories "To Build a Fire", "An Odyssey of the North", and "Love of Life".

NOVELS AND SOCIAL WRITINGS; The People of the Abyss, he Road, the Iron Heel, Martin Eden, John Barleycorn and Essays