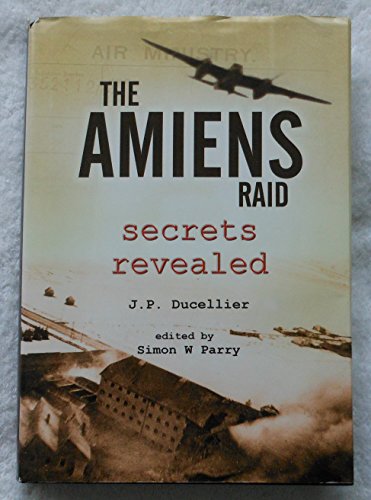 Amiens Raid The legendary 'Operation Jericho' was one of the famous precision bombing raids of WW2, a raid that inspired the films 633 Squadron and Mosquito Squadron as well as many books. This book reveals the truth behind the raid. Full description

Three squadrons of Mosquito's streak over snow covered France at tree-top height; their target a prison full of Resistance Fighters and British Agents, their purpose to free them - or kill them. Desperate calls to London from the French Resistance told of 100 men and women due to be shot at dawn, and of a British Agent being tortured to reveal the secrets of the Allied invasion plan. Film-Star RAF pilot Group Captain Pickard led the raid that smashed the prison walls and killed the German guards while the Resistance stormed the prison to release their comrades . This is the legend behind one of the most famous precision bombing raids of WW2, a raid of great daring that inspired the films 633 Squadron and Mosquito Squadron - but what was the truth? For over 60 years this version of events has been believed and many have gone to their graves in the certain knowledge that they had helped save the inmates from certain death and preserved the secret of the coming invasion, but this was not the truth. The following are among the often repeated 'facts' that are shown to be incorrect: Legend: The raid was to free Resistance workers and saboteurs Truth: The raid was part of a deception that led Rommel to believe the Allies would land in the north Legend: The raid was code-named 'Operation Jericho' Truth: The raid had no code-name. It was called 'Operation Jericho' in a post-war film Legend: A mass-execution was to take place the next day Truth: There was no 'mass-execution' of Resistance workers planned Legend: A British Agent who knew the details of the Allied Invasion was being tortured to reveal the secrets Truth: There was no such agent Legend: 'Film Star' pilot Pickard lead the raid and dropped the bomb that breached the walls Truth: Group Captain Pickard was shot down before he dropped his bombs

Operation Jericho , one of the most famous RAF operations of WW2. - A daring low-level raid on Amiens Prison by 18 Mosquitos, their task to smash down the walls and release 120 Resistance fighters due to be shot the very next day. - A do-or-die mission that cost the life of the leader of the raid, Group Captain Percy Pickard DSO** DFC as well as three other experienced airmen. This epic story has been repeated in dozens of books and articles over the years and sits proudly in the history of the Royal Air Force. But there is one fundamental problem to the story. There were no prisoners awaiting execution, in fact the French Resistance had no idea why the RAF bombed this small provincial prison. The author discovered this fact whilst researching the wartime history of his local area. Determined to find the real reason for the raid, his search took him up through the chain of command right into the shadowy world of MI6 and beyond. He found that many files had been destroyed or removed from the National Archives, deliberate lies had been fed to the press and an entire cover story had been created to fool not only the public, but the Mosquito crews themselves. There was even a fake message of thanks from the French Resistance that was forwarded to the crews. But it was written by an Englishman in Whitehall. So what was the real reason for bombing the prison? Who ordered it and why were the facts covered up for so long? The truth has been hidden for over 65 years, and is, in many ways, more dramatic than the legend. But it is a story that could never have been told at the time as thousands of lives, and indeed the very future of Europe itself, were at stake. It is time for the secrets to be revealed. --red kite

Description du livre Red Kite, Walton on Thames, 2011. Hard Cover. Etat : New. Etat de la jaquette : New. The result of many years of painstaking detective work on both sides of the Channel has resulted in why this raid on the small prison in Amiens ever took place and why the story could never have been told at the time as thousands of lives and the very future of Europe were at stake. Size: 8vo - over 7ľ" - 9ľ" tall. N° de réf. du vendeur 158622