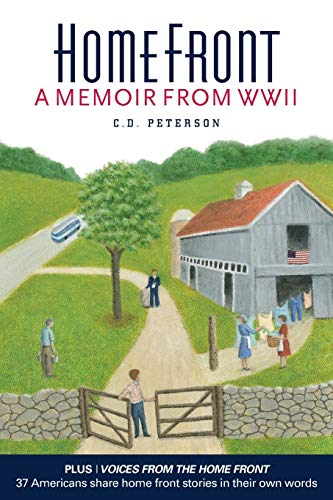 Description du livre Paperback. Etat : New. Language: English. Brand new Book. In You Can't Go Home Again, Thomas Wolfe says, "Some things will never change. Some things will always be the same. Lean down your ear upon the earth and listen." C. D. Peterson's Homefront: A Memoir from WWII permits all of us to lean down and listen as daily life unfolds for ordinary people on a New England dairy farm during the 40's. We are introduced to the Peterson family: Douglas, the youngest--about 8 when the story starts and the voice of the author--his mother, Edie, his father, Harry, Uncle Carl, (every inch a Swede), his grandfather Enoch, known as Pop, and his grandmother always called "The Boss" because nothing on the farm escaped her eye. C. D. Peterson offers his reason for capturing the gentle nostalgia of this particular time and place: ". I am among the 'last ones." Born in the 30s, we are the last ones who personally experienced the scarcity of the Depression, the fear and patriotism during World War II, and the exuberance in the brief pretelevision, postwar period when we felt safe and when the middle class was born."Home Front moves through a tenuous connection of episodes with slender threads of the author's memory--sentimental without being maudlin. Men are joining the Navy, including his own father. Japanese Americans on the west coast are being placed into internment camps. A school classmate claims that a German sub was seen off Cape Cod, and another classmate is absent for days because her father isn't coming home. Douglas hardly notices the slow changes as he matures. What seems to be constant is Hillcrest Farm - his farm. Crops need planting, hay needs cutting, cows need milking; milk needs pasteurizing; bottles need filling, customers need deliveries, and milk men need the kids who run from the truck to doorsteps with the wire baskets holding the clanking bottles.Such is the daily cycle of a dairy farm. However, the lateral events, the eclectic marginalia of life, are what living is all about: visiting a boy in an iron lung, listening to Edward R. Murrow "on the brown radio with the green tuning eye," finding a better place to fish, awkwardly kissing a girl for the first time, and riding down the river with her on a steel drum raft. It's hard to understand life while you are living it. The sounds of the traffic on the State highway grew louder--a subtle foreboding--as industry and modernization started moving away from Boston toward Hillcrest Farm. Shoppers' World, one of the first malls in America, was being built down the street and General Motors opened a huge assembly plant in town. More people now owned refrigerators and fewer customers of their dairy needed bottles of milk delivered every day. The converse of Wolfe's quote is also true: Some things will change.Home Front is a blend of two stories. On one hand it is a coming of age account of growing up in a tight knit family on a small farm in a small New England town, with flavors of Tom Sawyer, and on the other hand it is a narrative of how World War II and the post war years impacted the family. It brings home to the reader how like in a small rural town was irrevocably changes by the "progress" in the post war period. Homefront is unforgettable.C.D. Peterson's writing is commanding without idealizing the essence of the story; he is the master of the mot juste. The book has a complement of family photos and appealing illustrations that capture this time and place. The image of a lone barn cat in the final beat of the story is a masterful literary crescendo. Home Front concludes with an Addendum of Voices from The Home Front WWII. Thirty-eight people share their remembrances of this era in their own words and pictures. N° de réf. du vendeur AAV9780960081509