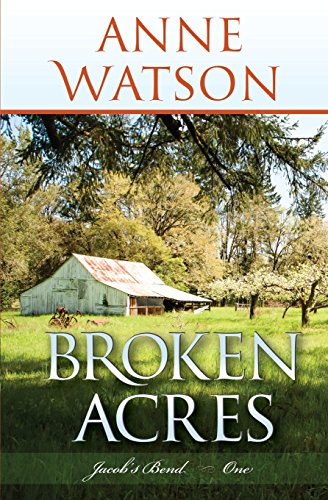 Anne Watson’s love for writing began with a simple poem, expanding quickly to articles, Bible studies and devotions. All culminating in the 366 day devotional, He Is Our Hope. Anne would say, “As a writer, words top my list of favorites. As a Christian, God’s Word tops every list.” Knowing Jesus Christ invigorates and enlightens every detail of Anne’s life. Walking with Him through the difficult valleys and up to the mountain peaks can best be described as an exciting adventure that ultimately leads home to heaven. Broken Acres, book one in the Jacob’s Bend series, began a journey into the realm of fiction several years ago for Anne. Editing and finishing the story became therapy when she herself, much like Madison Crane in her book, was suddenly thrust into widowhood. Anne makes her home in beautiful Southern Oregon where she continues to write, seeking the Lord and waiting on her next adventure.

In a matter of seconds ... reality changes everything. Madison Crane knows exactly what her future holds. That is until her husband, Jeff, unexpectedly dies. At the age of forty-two, with her children scattered in three different states, Maddie reluctantly accepts her best friend’s challenge to move from the big city of Chicago to the small Pacific Northwest town of Jacob’s Bend. It doesn’t take long for Maddie to realize she is seriously unprepared for her life as a single woman. Her travels reveal someone she would never have suspected lived inside her. Will Maddie’s hasty choices give her opportunities to discover who she is? Or will she get lost in the loneliness of widowhood? Join Maddie as unforeseen circumstances give her reason to hope for a better future.

Description du livre Etat : Very Good. Paperback A well-cared-for item that has seen limited use but remains in very good condition. The item is complete, and without noticable damage. It may have limited signs of use. Packed with care, shipped promptly. N° de réf. du vendeur Q-03-3345