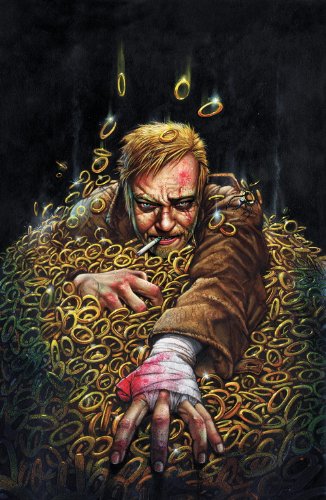 John Constantine’s grip on sanity has always been tenuous, but now he’s really lost it. Haunted by memories of striking Epiphany, the cracked magus tries appeasing his demonic tormenter by making a bloody offering of his own flesh. Things get so desperate he even attempts to summon the high prince of madness, Shade, The Changing Man. But Shade is not the gentle soul he once was – he’s desperate and dangerous. In fact, Shade’s harboring a nasty grudge and has more problems than Constantine – if that’s even possible.

Assisted by Shade, Constantine must regain his sanity, find out why he grew a white beard, lost a thumb and went out of his bloody mind. It will take a trip to Shade’s home planet to learn the truth – and to settle an old score between Shade and Constantine.

Peter Milligan has written a variety of comics, including Shade, The Changing Man, Enigma and The Extremist.Giuseppe Camuncoli s artwork appeared in Spider Man, The Intimates and Jonah Hex.Simon Bisley has produced artwork from A.B.C. Warriors to Batman/Judge Dredd: Judgement on Gotham. He is a regular artist for Heavy Metal magazine.