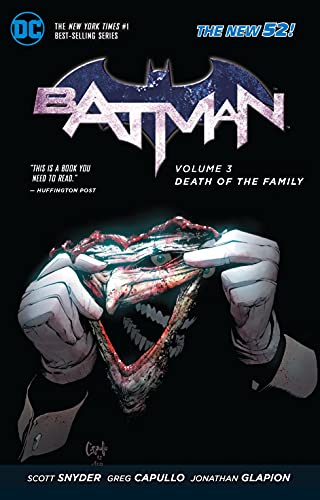 This is a number 1 New York Times Bestseller! After having his face sliced off one year ago, the Joker makes his horrifying return to Gotham City! But even for man who's committed a lifetime of murder, he's more dangerous than ever before. How can Batman protect his city and those he's closest to? It all leads back to Arkham Asylum...This new softcover collects the critically acclaimed tale "Death of the Family" from the superstar number 1 New York Times best-selling team of writer Scott Snyder and artist Greg Capullo. This title collects Batman numbered 13-17.

One year ago, the Joker limped off the streets of Gotham, mutilated and scarred when someone had taken the pale white skin right off of his face.

But now, the Dark Knight’s greatest foe has returned but for once, Batman doesn’t seem to be his target. Instead, the Joker turns his vile hatred towards Commissioner Gordon, Alfred, Robin, Nightwing, Batgirl, Red Hood and Red Robin ... the only family Bruce Wayne has left. The Clown Prince of Crime will unleash his most unpredictable, vicious and psychotic assault ever on everyone Batman holds dear.

Can Batman stop his arch-rival’s most deranged assault ever? Or will the cost of a deadly secret be a family member’s life?

#1 New York Times best-selling creators Scott Snyder (American Vampire) and Greg Capullo (Spawn) present the long-awaited return of the Joker, as he unleashes his most terrifying, personal assault ever on the Dark Knight. Batman: Death of The Family collects Batman #13-17 along with backup stories illustrated by award-winning artist Jock (Batman: The Black Mirror).

"This is a book you need to read. Whether you're a fan of comics or not. If you're a fan of good storytelling and can buy into the conceit that a man dressed as a bat can make a difference in the world, then there's no better book for you than this one."—Huffington Post

"One of the best Batman runs in the history of the character. The fact that two of the biggest names in the industry are handling the return of the Joker is just icing on the cake."—IGN

Description du livre DC Comics, United States, 2014. Paperback. Etat : New. New 52 ed. Language: English. Brand new Book. A #1 New York Times Bestseller! After having his face sliced off oneyear ago, the Joker makes his horrifying return to Gotham City! But even for manwho's committed a lifetime of murder, he's more dangerous than ever before. Howcan Batman protect his city and those he's closest to? It all leads back toArkham Asylum. This new softcover collects the critically acclaimed tale"Death of the Family" from the superstar #1 New York Times best-sellingteam of writer Scott Snyder and artist Greg Capullo. Collects Batman #13-17. N° de réf. du vendeur BZV9781401246020

Description du livre Paperback. Etat : New. 52nd. Paperback. The first printing of this new hardcover will feature a special acetate dust jacket showcasing the face of The Joker. After having his face sliced off one year ago, the Joker makes his hor.Shipping may be from multiple locations in the US or from the UK, depending on stock availability. 176 pages. 0.300. N° de réf. du vendeur 9781401246020