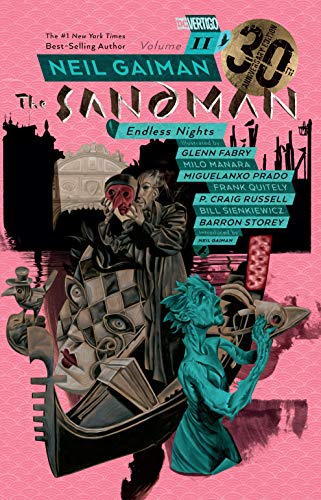 One of the most popular and critically acclaimed graphic novels of all time, Neil Gaiman's award-winning masterpiece The Sandman set the standard for mature, lyrical fantasy in the modern comics era. Illustrated by an exemplary selection of the medium's most gifted artists, the series is a rich blend of modern and ancient mythology in which contemporary fiction, historical drama, and legend are seamlessly interwoven.

Neil Gaiman is the New York Times best-selling author of the Newbery Medal winning The Graveyard Book and Coraline, the basis for the hit movie. His other books include Ananasi Boys, Neverwhere, American Gods and Stardust(winner of the American Library Association's Alex Award as one of 2000's top novels for young adults) and the short story collections M is for Magic and Smoke and Mirrors. He is also the author of The Wolves in the Walls and The Day I Traded My Dad for Two Goldfish, both written for children. Among his many awards are the Eisner, the Hugo, the Nebula, the World Fantasy and the Bram Stoker. Originally from England, he now lives in the United States.

Description du livre Paperback. Etat : New. Quietly, Frank; Sienkiewicz, Bill; Manara, Milo; Fabry, Glenn (illustrateur). Anniversary. Language: English. Brand new Book. Joined by a dream team of artists from around the world, Neil Gaiman the Hugo Award-winning, New York Times bestselling author of American Gods and Coraline returns to the beloved characters he made famous in The Sandman Vol. 11: Endless Nights. The Sandman Vol. 11: Endless Nights reveals the legend of the Endless, a family of magical and mythical beings who exist and interact in the real world. Born at the beginning of time, Destiny, Death, Dream, Desire, Despair, Delirium, and Destruction are seven brothers and sisters who each lord over their respective realms. In addition to the seven tales of the Endless, The Sandman: Endless Nights includes a biography section in the spirit of the Sandman collections (designed by Dave McKean) and a summary of each volume in the Sandman Library. This highly imaginative book, the first graphic novel to be listed on the New York Times best-seller list, boasts diverse styles of breathtaking art as these seven peculiar and powerful siblings each reveal more about their true being as they star in their own tales of curiosity and wonder. Written by series creator Neil Gaiman, The Sandman: Endless Nights is illustrated by some of the industry s best talents, including Frank Quietly (All-Star Superman), P. Craig Russell (The Sandman: The Dream Hunters), Glenn Fabry (Preacher), Bill Sienkiewicz (Elektra) and more!. N° de réf. du vendeur AA99781401292614