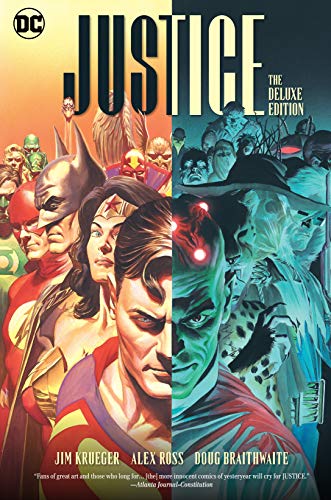 The greatest criminal masterminds of our time appear to be acting in concert -- but with a surprising plan that seeks to achieve more good than the JLA ever could.

They are the World's Greatest Super-Heroes. But the members of the fabled Justice League of America are about to learn that they aren't the only ones who can band together and work toward a common goal. The world's deadliest criminal masterminds have learned some valuable lessons from their past defeats, and their latest plan finds them acting in concert to bring about total victory--for the forces of good!

Behind its seemingly sincere façade, however, this campaign to save the world is actually a carefully honed scheme to enslave it--by systematically discrediting and neutralizing the members of the Justice League, one by one. As the villains begin to gain the world's trust, our heroes must redouble their efforts to expose the truth--to fight...for JUSTICE!

Description du livre Hardback. Etat : New. Ross, Alex (illustrateur). Deluxe. Language: English. Brand new Book. They are the World s Greatest Super-Heroes. But the members of the fabled Justice League of America are about to learn they aren t the only ones who can band together toward a common goal. The greatest supervillains the world has ever known are working together as one - with a shocking goal that will have the people of earth singing their praises! But it s just the latest attempt at world domination - and our heroes are there to expose the truth, to fight for Justice! The DC Universe is reimagined by fan-favourite painter Alex Ross (Kingdom Come, Marvels) and writer Jim Krueger (Earth X, Universe X), with pencil art by Doug Braithwaite (Paradise X) painted by Ross. Collects Justice #1-12. N° de réf. du vendeur AA99781401293437