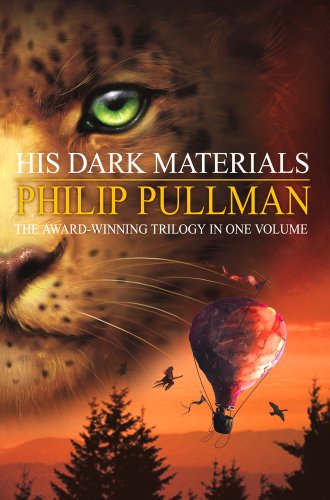 Philip Pullman's classic trilogy is now available as a stunning, large-format, bind-up edition. Since the first volume was published in 1955, and has now been filmed as "The Golden Compass", the trilogy has been acclaimed as a modern masterpiece, and has won the UK's top awards for children's literature. Today, the fabulous story of Lyra and her daemon is read and loved by adults and children alike. The extraordinary story moves between parallel universes. Beginning in Oxford, it takes Lyra and her animal-daemon Pantalaimon on a dangerous rescue mission to the ice kingdoms of the far north, where she begins to learn about the mysterious particles they call Dust - a substance for which a terrible war between different worlds will be fought...'This trilogy is one of the great imaginative works in the English Language. And it contains one of the best villains in all literature' - Terry Jones. Phillip Pullman has won the CILIP Carnegie Medal, the Guardian Children's Fiction Award, the Children's book of the Year - British Book Awards, the Whitbread Book of the Year, the Eleanor Farjeon Award and the Astrid Lindgren Award.

I began to write this novel with little sense of the plot, even less notion of the theme, and only the vaguest idea of the characters. I'm convinced that that's the way to do it. I tried to work out the plan of a novel once, when I was young, ahead of writing it. It was an excellent plan. It took me months and covered page after page, and in the end I was so fed up with the damn thing I threw it away and started a quite different novel with no preparation at all, which came out much better. I suppose these things are partly temperamental; I know that some excellent writers make a great thing of planning every book before they write it; but it doesn't work for me.

One thing such a technique prevents is what I think every long book must have if I'm not to go mad writing it, and that's the element of surprise. I had no idea what Iorek Byrnison, the armoured bear, would say when Lyra first came face to face with him. His vulnerability to strong drink was a huge surprise. I knew there was going to be a boy called Will, but his reason for running away and thus meeting Lyra was a complete mystery to me until it happened. As for Lee Scoresby, I was as ignorant of his existence as the gyptians themselves the sentence before he turned up. These surprises are pleasant and exciting; they feel like a kind of reward. If I knew they were coming I wouldn't enjoy them at all.

In the first sentence above, I mentioned something I called the theme. By that I mean what the book is about, in some fundamental sense. I've heard that some writers decide on a theme first, and then make up some characters and a plot to exemplify it. They seem to get on all right, but again, it wouldn't work for me. A book, especially a long book like His Dark Materials, has to have some sort of theme, or else you'll be working for a long time (this story took me seven years) in a moral vacuum. But that doesn't mean you have to decide what the theme is. If you're working as seriously as you know how to, for a matter of years, then a theme will emerge whether you want it to or not. It'll be something you think very important. It might be the most important thing you know. Once you know what it is, you can shape the story more precisely to help it show up, but it's a mistake to rely on the theme to lead the story for you. I think I did that in a couple of places in this book, and it's the worse for it. But there we are, we're never too old to learn. Next time I shall remember: the story should lead, and the theme will emerge in its own time and its own way. Besides, if you want to write something perfect, write a haiku. Anything longer is bound to have a few passages that don't work as well as they might.

So here is a story that was the best I could do at the time, written with all the power and all the love I had, about the things I think most important in the world. I think it was worth writing. I hope you think it's worth reading.

Philip Pullman
From the Hardcover edition.

PHILIP PULLMAN is one of the most acclaimed writers working today. He is best known for the His Dark Materials trilogy (The Golden Compass, The Subtle Knife, The Amber Spyglass), which has been named one of the top 100 novels of all time by Newsweek and one of the all-time greatest novels by Entertainment Weekly. He has also won many distinguished prizes, including the Carnegie Medal for The Golden Compass (and the reader-voted "Carnegie of Carnegies" for the best children's book of the past seventy years); the Whitbread (now Costa) Award for The Amber Spyglass; a Booker Prize long-list nomination (The Amber Spyglass); Parents' Choice Gold Awards (The Subtle Knife and The Amber Spyglass); and the Astrid Lindgren Memorial Award, in honor of his body of work. In 2004, he was appointed a Commander of the Order of the British Empire.

It has recently been announced that The Book of Dust, the much anticipated new book from Mr. Pullman, also set in the world of His Dark Materials, will be published as a major work in three parts, with the first part to arrive in October 2017.

Philip Pullman is the author of many other much-lauded novels. Other volumes related to His Dark Materials: Lyra’s Oxford, Once Upon a Time in the North, and The Collectors. For younger readers: I Was a Rat!; Count Karlstein; Two Crafty Criminals; Spring-Heeled Jack, and The Scarecrow and His Servant. For older readers: the Sally Lockhart quartet: The Ruby in the Smoke, The Shadow in the North, The Tiger in the Well, and The Tin Princess; The White Mercedes; and The Broken Bridge.

Philip Pullman lives in Oxford, England. To learn more, please visit philip-pullman.com and hisdarkmaterials.com. Or follow him on Twitter at @PhilipPullman.