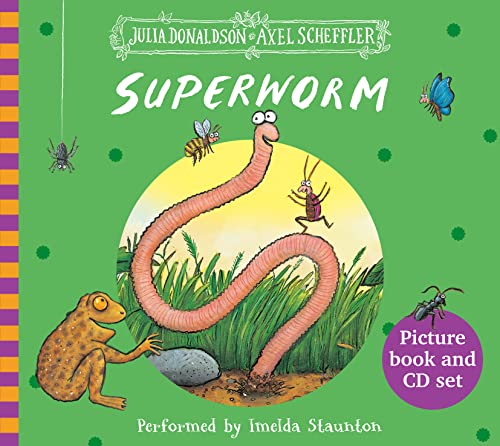 Praise for A GOLD STAR FOR ZOGA NEW YORK TIMES Notable Children's Book of 2012"Donaldson, the current children's laureate in Britain, is a master of witty comic rhyme and original stories with heart. Here she and Scheffler outdo themselves with the smart, funny -- dare I say, deep? -- story of a dragon in training, a princess who wants to be a doctor and a knight who could use a bit of rescuing. The book gets a gold star too." -- NEW YORK TIMES"A delightful new twist on happily-ever-after." -- SCHOOL LIBRARY JOURNALPraise for TABBY MCTAT, THE MUSICAL CAT"A surprising and fun read.... [Scheffler's] bright-eyed, warmhearted characterizations make this a wonderful testimony to the ties that bind." -- PUBLISHERS WEEKLY"The team behind ROOM ON THE BROOM pair up again in what has become a near-annual ritual of picture book perfection.... Impeccable rhythm and rhyme distinguish this particular tale, filled, as always, with Donaldson's exemplary humor and heart." -- NEW YORK TIMES"A fun frolic about musical duos who aren't quite the same without each other. Like their trademark tune, it all ends 'PURRRR-fectly'." -- BOOKLISTPraise for STICK MAN* "Donaldson and Scheffler's poignant, suspenseful profile of an inanimate object recalls Laurie Keller or THE VELVETINE RABBIT. Donaldson's rhymes never skip a beat, and Scheffler personalizes the many animals, people and settings in his witty watercolors. This yarn could become a December perennial." -- PUBLISHERS WEEKLY, starred review* "Scheffler's engaging illustrations, Donaldson's irresistible rhyming text and repeated refrains make this a winning read-aloud that will stick around long after the holiday season." --KIRKUS REVIEWS, starred review

Julia Donaldson is currently being honored as the UK Children's Laureate, and has written many bestselling and beloved picture books and novels for young readers. She lives in Glasgow, Scotland, with her husband, Malcolm. Axel Scheffler's award-winning books include ROOM ON THE BROOM, THE SNAIL AND THE WHALE, and THE GRUFFALO. His illustrations have been published in more than thirty countries. He lives in London, England.

Description du livre 2014. Book & Merchandise. Etat : New. Book & Merchandise. Superworm is super-long. Superworm is super-strong. Watch him wiggle! See him squirm! Hip, hip, hooray for SUPERWORM! Never fear, Superworm's here! He can fish Spider out of.Shipping may be from multiple locations in the US or from the UK, depending on stock availability. 32 pages. 0.260. N° de réf. du vendeur 9781407139333

Description du livre 2014. Book & Merchandise. Etat : New. Book & Merchandise. Superworm is super-long. Superworm is super-strong. Watch him wiggle! See him squirm! Hip, hip, hooray for SUPERWORM! Never fear, Superworm's here! He can fish .Shipping may be from our Sydney, NSW warehouse or from our UK or US warehouse, depending on stock availability. 32 pages. 0.260. N° de réf. du vendeur 9781407139333