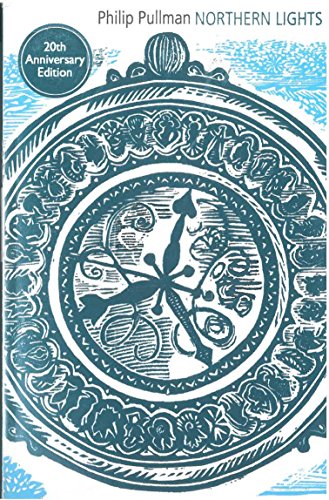 1
THE DECANTER OF TOKAY

Lyra and her daemon moved through the darkening hall, taking care to keep to one side, out of sight of the kitchen. The three great tables that ran the length of the hall were laid already, the silver and the glass catching what little light there was, and the long benches were pulled out ready for the guests. Portraits of former Masters hung high up in the gloom along the walls. Lyra reached the dais and looked back at the open kitchen door, and, seeing no one, stepped up beside the high table. The places here were laid with gold, not silver, and the fourteen seats were not oak benches but mahogany chairs with velvet cushions.

Lyra stopped beside the Master's chair and flicked the biggest glass gently with a fingernail. The sound rang clearly through the hall.

"You're not taking this seriously," whispered her daemon. "Behave yourself."

Her daemon's name was Pantalaimon, and he was currently in the form of a moth, a dark brown one so as not to show up in the darkness of the hall.

"They're making too much noise to hear from the kitchen," Lyra whispered back. "And the Steward doesn't come in till the first bell. Stop fussing."

But she put her palm over the ringing crystal anyway, and Pantalaimon fluttered ahead and through the slightly open door of the Retiring Room at the other end of the dais. After a moment he appeared again.

"There's no one there," he whispered. "But we must be quick."

Crouching behind the high table, Lyra darted along and through the door into the Retiring Room, where she stood up and looked around. The only light in here came from the fireplace, where a bright blaze of logs settled slightly as she looked, sending a fountain of sparks up into the chimney. She had lived most of her life in the College, but had never seen the Retiring Room before: only Scholars and their guests were allowed in here, and never females. Even the maid- servants didn't clean in here. That was the Butler's job alone.

Pantalaimon settled on her shoulder.

"Happy now? Can we go?" he whispered.

"Don't be silly! I want to look around!"

It was a large room, with an oval table of polished rosewood on which stood various decanters and glasses, and a silver smoking stand with a rack of pipes. On a sideboard nearby there was a little chafing dish and a basket of poppy heads.

"They do themselves well, don't they, Pan?" she said under her breath.

She sat in one of the green leather armchairs. It was so deep she found herself nearly lying down, but she sat up again and tucked her legs under her to look at the portraits on the walls. More old Scholars, probably; robed, bearded, and gloomy, they stared out of their frames in solemn disapproval.

"What d'you think they talk about?" Lyra said, or began to say, because before she'd finished the question she heard voices outside the door.

"Behind the chair--quick!" whispered Pantalaimon, and in a flash Lyra was out of the armchair and crouching behind it. It wasn't the best one for hiding behind: she'd chosen one in the very center of the room, and unless she kept very quiet...

The door opened, and the light changed in the room; one of the incomers was carrying a lamp, which he put down on the sideboard. Lyra could see his legs, in their dark green trousers and shiny black shoes. It was a servant.

Then a deep voice said, "Has Lord Asriel arrived yet?"

It was the Master. As Lyra held her breath, she saw the servant's daemon (a dog, like all servants' daemons) trot in and sit quietly at his feet, and then the Master's feet became visible too, in the shabby black shoes he always wore.

"No, Master," said the Butler. "No word from the aerodock, either."

"I expect he'll be hungry when he arrives. Show him straight into Hall, will you?"

"And you've decanted some of the special Tokay for him?"

"Yes, Master. The 1898, as you ordered. His Lordship is very partial to that, I remember."

"Do you need the lamp, Master?"

"Yes, leave that too. Look in during dinner to trim it, will you?"

The Butler bowed slightly and turned to leave, his daemon trotting obediently after him. From her not-much-of-a-hiding place Lyra watched as the Master went to a large oak wardrobe in the corner of the room, took his gown from a hanger, and pulled it laboriously on. The Master had been a powerful man, but he was well over seventy now, and his movements were stiff and slow. The Master's daemon had the form of a raven, and as soon as his robe was on, she jumped down from the wardrobe and settled in her accustomed place on his right shoulder.

Lyra could feel Pantalaimon bristling with anxiety, though he made no sound. For herself, she was pleasantly excited. The visitor mentioned by the Master, Lord Asriel, was her uncle, a man whom she admired and feared greatly. He was said to be involved in high politics, in secret exploration, in distant warfare, and she never knew when he was going to appear. He was fierce: if he caught her in here she'd be severely punished, but she could put up with that.

What she saw next, however, changed things completely.

The Master took from his pocket a folded paper and laid it on the table beside the wine. He took the stopper out of the mouth of a decanter containing a rich golden wine, unfolded the paper, and poured a thin stream of white powder into the decanter before crumpling the paper and throwing it into the fire. Then he took a pencil from his pocket, stirred the wine until the powder had dissolved, and replaced the stopper.

His daemon gave a soft brief squawk. The Master replied in an undertone, and looked around with his hooded, clouded eyes before leaving through the door he'd come in by.

Lyra whispered, "Did you see that, Pan?"

"Of course I did! Now hurry out, before the Steward comes!"

But as he spoke, there came the sound of a bell ringing once from the far end of the hall.

"That's the Steward's bell!" said Lyra. "I thought we had more time than that."

Pantalaimon fluttered swiftly to the hall door, and swiftly back.

"The Steward's there already," he said. "And you can't get out of the other door..."

Review, USA Today (circ: 2, 192,098), November 1, 2007:
"The 1996 novel, published for children but widely praised by grown-ups, is set in a British world where everyone has a personal 'daemon,' the manifestation of his or her soul in animal form ... Pullman ... has seen an early cut of the film without its computer-generated effects and calls it 'rich, strange and wonderful.'"

Review, Entertainment Weekly (circ: 1, 830, 769), November 9, 2007:
"The polar bear warriors in THE GOLDEN COMPASS ... are just part of the vast fantastical metaverse explored by young Lyra Belacqua in a $150 million adaptation of the first book in Philip Pullman's His Dark Materialstrilogy."
-Holiday Movie Preview

Description du livre Scholastic, 2015. Taschenbuch. Etat : Neu. Neu Neuware, Importqualität, auf Lager - Lyra Belacqua and her animal daemon live half-wild and carefree among scholars of Jordan College, Oxford. The destiny that awaits her will take her to the frozen lands of the Arctic, where witch-clans reign and ice-bears fight. Her extraordinary journey will have immeasurable consequences far beyond her own world. 448 pp. Englisch. N° de réf. du vendeur INF1000556217