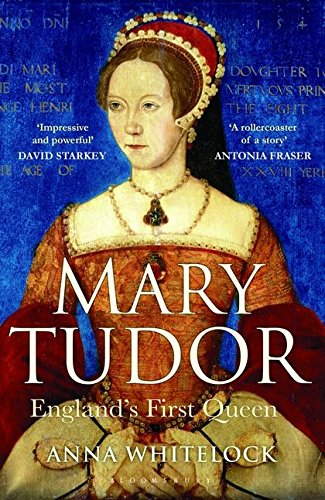 PRINCESS OF ENGLAND
Mary, the daughter of king henry viii and katherine of Aragon, was born at four in the morning of Monday, February 18, 1516, at Placentia, the royal palace at Greenwich, on the banks of the Thames River in London. Three days later, the nobility of England gathered at the royal apartments to form a guard of honor as the baby emerged from the queen's chamber in the arms of Katherine's devoted friend and lady-in-waiting, Elizabeth Howard, countess of Surrey. Beneath a gold canopy held aloft by four knights of the realm, the infant was carried to the nearby Church of the Observant Friars.1 It was the day of Mary's baptism, her first rite of passage as a royal princess.

The procession of gentlemen, ladies, earls, and bishops paused at the door of the church, where, in a small arras-covered wooden archway, Mary was greeted by her godparents, blessed, and named after her aunt, Henry's favorite sister. The parade then filed two by two into the church, which had been specially adorned for the occasion.

Jewel-encrusted needlework hung from the walls; a font, brought from the priory of Christchurch Canterbury and used only for royal christenings, had been set on a raised and carpeted octagonal stage, with the accoutrements for the christening--basin, tapers, salt, and chrism--laid out on the high altar.2 After prayers were said and promises made, Mary was plunged three times into the font water, anointed with the holy oil, dried, and swaddled in her baptismal robe. As Te Deums were sung, she was taken up to the high altar and confirmed under the sponsorship of Margaret Pole, countess of Salisbury.3 Finally, with the rites concluded, her title was proclaimed to the sound of the heralds' trumpets:

God send and give long life and long unto the right high, right noble and excellent Princess Mary, Princess of England and daughter of our most dread sovereign lord the King's Highness.4 Despite the magnificent ceremony, the celebrations were muted. This was not the longed-for male heir, but a girl.

Six years earlier, in the Church of the Observant Friars, Henry had married his Spanish bride, Katherine of Aragon. Within weeks of the wedding, Katherine was pregnant and Henry wrote joyfully to his father-in-law, Ferdinand of Aragon, proclaiming the news: "Your daughter, her Serene Highness the Queen, our dearest consort, has conceived in her womb a living child and is right heavy therewith."5 Three months later, as England awaited the birth of its heir, Katherine miscarried. Yet the news was not made public, and with her belly still swollen, most likely with an infection, she was persuaded by her physician that she "remained pregnant of another child."6 A warrant was issued for the refurbishment of the royal nursery, and in March 1511 she withdrew to her apartments in advance of the birth.7

For weeks the court waited for news of the delivery, but labor did not come. As Katherine's confessor, Fray Diego, reported, "it has pleased our Lord to be her physician in such a way that the swelling decreased."8 There was no baby.

Luiz Caroz, the new Spanish ambassador, angrily condemned those who had maintained "that a menstruating woman was pregnant" and had made her "withdraw publicly for her delivery."9 Many councillors now feared that the queen was "incapable of conceiving."10 Fearing her father's displeasure, Katherine wrote to Ferdinand in late May, four months after the event, claiming that only "some days before" she had miscarried a daughter and failing to mention the subsequent false pregnancy. Do "not be angry," she begged him, "for it has been the will of God."11

Hope soon revived, and while writing letters of deceit to her father, Katherine discovered she was pregnant once more.12 Seven months later, on the morning of New Year's Day, bells rang out the news of the safe delivery of a royal baby. It was a living child and a son; England had its male heir. Celebrations engulfed the court and country, and five days later the child was christened and proclaimed "Prince Henry, first son of our sovereign lord, King Henry VIII." The king rode to the Shrine of Our Lady at Walsingham in Norfolk to give thanks and hold a splendid joust in his son's honor. But the celebrations were short-lived. Three weeks later Prince Henry died. It did not augur well. Over the next seven years, failed pregnancy followed failed pregnancy, each ending in miscarriage, stillbirth, or infant death.

So when in the spring of 1515 the thirty-one-year-old queen fell pregnant for the seventh time, there was a somewhat subdued response. This pregnancy, however, followed its natural course, and in the early weeks of the New Year the royal couple moved to the royal palace at Greenwich, where Henry had been born twenty-four years before and where preparations were now under way for the queen's confinement.

The Royal Book, the fifteenth-century book of court etiquette for all such royal events drawn up by Margaret Beaufort, Henry VIII's grandmother, outlined the necessary arrangements. The queen's chamber was to be turned into a tapestried cocoon, the floor covered with thickly laid carpet; the walls, ceiling, and windows hung with rich arras and one window left loosely covered to allow in air and light. The wall tapestries, the queen's canopied bed, and the bed hangings were to be of simple design, with figurative images avoided for fear of provoking dreams that might disturb mother and child.

There was to be a cupboard stacked with gold and silver plate to signify the queen's status, and crucifixes, candlesticks, images, and relics placed on an altar before which she could pray. At the foot of her canopied bed was placed a daybed, covered with a quilt of crimson satin and embroidered with the king and queen's arms, where the birth would take place.13

In late January, with all made ready, Katherine began the ceremony of "taking her chamber." First she went to the Chapel Royal to hear Mass; then, returning to the Presence Chamber, she sat beneath her cloth of estate--the mark of her rank--and took wines and spices with members of the court. Lord Mountjoy, her chamberlain, called on everyone to pray that "God would give her the good hour"—safe delivery--and the queen was accompanied to the door of her bedchamber in solemn procession. There the men departed, and Katherine entered the exclusively female world of childbirth. As The Royal Book stipulated, "All the ladies and gentlewomen to go in with her, and no man after to come in to the chamber save women, and women to be inside."14 She would not be in male company again until her "churching," the purification after labor, thirty days after the birth. Officers, butlers, and other servants would bring all manner of things to the chamber door, but there the women would receive them.

After days of seclusion and hushed expectancy, the February dawn was broken with bells ringing in the news: the queen had delivered a healthy baby, but a girl. Writing two days later, Sebastian Giustiniani, the Venetian ambassador, assured the doge and Senate that he would offer their congratulations but added that, had the baby been a son, "[he] should have already done so, as in that case, it would not have been fit to delay the compliment."15 Eventually, the ambassador sought an audience with King Henry and congratulated him "on the birth of his daughter, and on the wellbeing of her most serene mother Queen." The state would have been "yet more pleased," he added, "had the child been a son." Henry remained optimistic. "We are both young," he insisted; "if it was a daughter this time, by the grace of God, sons will follow."16

In the summer of 1553, against all odds, Mary Tudor was the first woman to be crowned Queen of England. Anna Whitelock's absorbing debut tells the remarkable story of a woman who was a princess one moment, and a disinherited bastard the next. It tells of her Spanish heritage and the unbreakable bond between Mary and her mother, Katherine of Aragon; of her childhood, adolescence, rivalry with her sister Elizabeth and finally her womanhood. Throughout her life Mary was a fighter, battling to preserve her integrity and her right to hear the Catholic mass. Finally, she fought for the throne. The Mary that emerges from this groundbreaking biography is not the weak-willed failure of traditional narratives, but a complex figure of immense courage, determination and humanity.

Description du livre Bloomsbury Publishing PLC. Etat : New. 2010. Paperback. In the summer of 1553, against all odds, Mary Tudor was the first woman to be crowned Queen of England. This title tells of Mary's Spanish heritage and the unbreakable bond between Mary and her mother, Katherine of Aragon; of her childhood, adolescence, rivalry with her sister Elizabeth and finally her womanhood. Num Pages: 384 pages, col. Illustrations, col. ports., geneal. table. BIC Classification: 1DBKE; 3JB; HBJD1; HBLH. Category: (G) General (US: Trade). Dimension: 198 x 130 x 26. Weight in Grams: 330. . . . . . Books ship from the US and Ireland. N° de réf. du vendeur V9781408800782