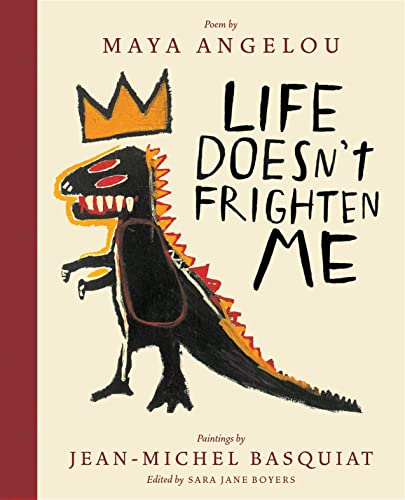 Shadows on the wall Noises down the hall Life doesn't frighten me at all Maya Angelou's brave, defiant poem celebrates the courage within each of us, young and old. From the scary thought of panthers in the park to the unsettling scene of a new classroom, fearsome images are summoned and dispelled by the power of faith in ourselves. Angelou's strong words are matched by the daring vision of artist Jean-Michel Basquiat, whose childlike style reveals the powerful emotions and fanciful imaginings of childhood. Together, Angelou's words and Basquiat's paintings create a place where every child, indeed every person, may experience his or her own fearlessness. In this brilliant introduction to poetry and contemporary art, brief biographies of Angelou and Basquiat accompany the text and artwork, focusing on the strengths they took from their lives and brought to their work. A selected bibliography of Angelou's books and a selected museum listing of Basquiat's, works open the door to further inspiration through the fine arts.

Poet Maya Angelou is, among other things, a novelist, playwright, actress, dancer, and civil rights activist. She is a professor of American Studies at Wake Forest University, Winston-Salem, North Carolina, and was commissioned to write and read a poem for the 1993 presidential inauguration. Arist Jean-Michel Basquiat was born in Brooklyn, New York, of Haitian and Puerto Rican parents. His first artistic expressions were made and enjoyed as urban street art. Later he used more traditional artists' materials, winning fame and admiration in the art world. Basquiat died in 1988 at the age of 27. Editor Sara Jane Boyers shares her professional life between the entertainment industry and the art community. A television producer, collector of twentieth-century art, and mother of two, she created this, her first book, to introduce children and all readers to the best in literature and contemporary art.