Articles liés ŕ Percy Jackson and the Olympians, Book One The Lightning...

Riordan, Rick Percy Jackson and the Olympians, Book One The Lightning Thief

Percy Jackson and the Olympians, Book One The Lightning Thief 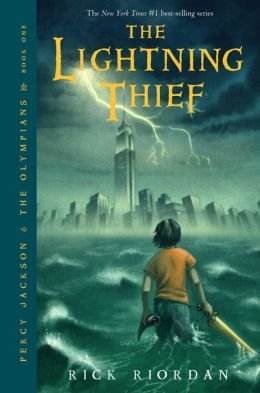 The Lightning Thief: the First book in Rick Riordan's Percy Jackson series.The first bestselling book in Rick Riordan's phenomenally successful Percy Jackson series.Look, I didn't want to be a half-blood. I never asked to be the son of a Greek God. I was just a normal kid, going to school, playing basketball, skateboarding. The usual. Until I accidentally vaporized my maths teacher. That's when things started really going wrong. Now I spend my time fighting with swords, battling monsters with my friends, and generally trying to stay alive. This is the one where Zeus, God of the Sky, thinks I've stolen his lightning bolt - and making Zeus angry is a very bad idea. Can Percy find the lightning bolt before a fully-fledged war of the Gods erupts?Praise for the Percy Jackson series:'Witty and inspired. Gripping, touching and deliciously satirical...This is most likely to succeed Rowling. Puffin is on to a winner' - Amanda Craig, The Times'Puns, jokes and subtle wit, alongside a gripping storyline' - Telegraph'Perfectly paced, with electrifying moments chasing each other like heartbeats' - New York TimesRick Riordan is an award-winning mystery writer. For the past fifteen years he has taught at middle schools in the San Francisco Bay area and in Texas. Rick lives in San Antonio, Texas, with his wife and two sons. Percy Jackson and the Lightning Thief, the overall winner of the Red House Children's Book Award, was Rick's first novel featuring the heroic young demigod.The Percy Jackson series:The Lightning Thief; The Sea of Monsters; The Battle of the Labyrinth; The Titan's Curse; The Last Olympian Heroes of Olympus:The Lost Hero; The Son of Neptune; The Mark of AthenaThe Kane Chronicles:The Red Pyramid; The Throne of Fire; The Serpent's Shadow

Twelve-year-old Percy Jackson is about to be kicked out of boarding school . . . again. No matter how hard he tries, he can't seem to stay out of trouble. But can he really be expected to stand by and watch while a bully picks on his scrawny best friend? Or not defend himself against his pre-algebra teacher when she turns into a monster and tries to kill him? Of course, no one believes Percy about the monster incident; he's not even sure he believes himself.

Until the Minotaur chases him to summer camp.

Suddenly, mythical creatures seem to be walking straight out of the pages of Percy's Greek mythology textbook and into his life. The gods of Mount Olympus, he's coming to realize, are very much alive in the twenty-first century. And worse, he's angered a few of them: Zeus's master lightning bolt has been stolen, and Percy is the prime suspect.

Now Percy has just ten days to find and return Zeus's stolen property, and bring peace to a warring Mount Olympus. On a daring road trip from their summer camp in New York to the gates of the Underworld in Los Angeles, Percy and his friends–one a satyr and the other the demigod daughter of Athena–will face a host of enemies determined to stop them. To succeed on his quest, Percy will have to do more than catch the true thief: he must come to terms with the father who abandoned him; solve the riddle of the Oracle, which warns him of failure and betrayal by a friend; and unravel a treachery more powerful than the gods themselves.