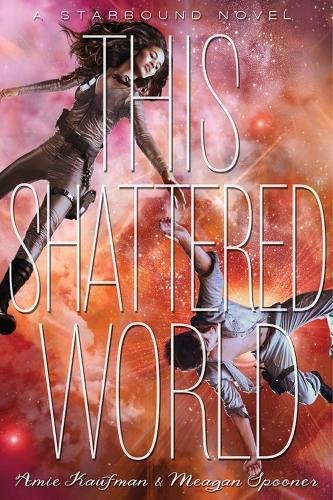 Gr 7 Up Kaufman and Spooner focus on new characters and a new world in this splendid return to the universe that they created in These Broken Stars (Hyperion, 2013). Captain Jubilee Chase is the longest serving soldier on the partially terraformed planet of Avon, the only person who has proved immune to "The Fury," the mindless rage that strikes off-worlders who come to serve on Avon. Flynn Cormac is a member of the native Fianna rebels, who hopes that by kidnapping Chase, he can discover more about a mysterious facility hidden in the swamp to the east of the military's main outpost. Neither wants a return to the open warfare between the military and the Fianna that ended a decade earlier with the execution of the Fianna's former leader, Flynn's sister. The two develop a mutual respect that grows to something more--even as their alliance comes to be seen as a betrayal by both sides. Midway through the book, Tarver Merendsen and Lilac LaRoux make appearances, tying the many unexplained events in this title to those in the first volume of the "Starbound" trilogy. Kaufman and Spooner prove that their first brilliant installment was no fluke with this strong second outing. They provide complex characters and a situation with no simple solution. There is action, a spark of romance, and a mystery, all set on a fully-realized planet. This should have broad appeal among teen and adult science fiction readers.―School Library Jounal

The format's the same, the worlds are familiar, the authors identical, but the main characters are different in this second book in the Starbound trilogy. Instead of star-crossed lovers Lilac and Tarver, Lee and Flynn, soldier and rebel, are destined to be enemies on the cloud-shrouded, unfinished Avon. Flynn is convinced that something-perhaps the wisps or the whispers-is sabotaging his planet's progress. Lee is the captain sent to tamp down rebellion, keeping order regardless of the cost. Neither side is right, neither is wrong, but this sci-fi Romeo and Juliet are destined to fall in love in spite of the hatred and danger that surround them. Kaufman and Spooner have transitioned smoothly from These Broken Stars (2013) to this book, while reintroducing Lilac and Tarver at the perfect moment to meld the story lines. The authors' world building, their ability to combine unique and familiar themes, their talent for sustaining dual voices in the midst of romance and tension create a companion series that promises another world, another adventure, and, if we're lucky, another set of lovers, this time on Corinth.―Booklist

PRAISE FOR THESE BROKEN STARS

"The authors begin with star-crossed lovers and a crash-landing survival story but add excitingly original material to these tropes to create a wonderful tale that should appeal to both teen and adult readers."―School Library Journal

Jubilee Chase and Flynn Cormac should never have met.

Lee is captain of the forces sent to Avon to crush the terraformed planet's rebellious colonists, but she has her own reasons for hating the insurgents.

Rebellion is in Flynn's blood. His sister died in the original uprising against the powerful corporate conglomerate that rules Avon with an iron fist. These corporations make their fortune by terraforming uninhabitable planets across the universe and recruiting colonists to make the planets livable, with the promise of a better life for their children. But they never fulfilled their promise on Avon, and decades later, Flynn is leading the rebellion.

Desperate for any advantage against the military occupying his home, Flynn does the only thing that makes sense when he and Lee cross paths: he returns to base with her as prisoner. But as his fellow rebels prepare to execute this tough-talking girl with nerves of steel, Flynn makes another choice that will change him forever. He and Lee escape base together, caught between two sides in a senseless war. The stunning second novel in the Starbound trilogy is an unforgettable story of love and forgiveness in a world torn apart by war.

1. This Shattered World (A Starbound Novel (2))

2. This Shattered World (A Starbound Novel (2))

3. This Shattered World (A Starbound Novel (2))

4. This Shattered World (A Starbound Novel (2))

5. This Shattered World (A Starbound Novel (2))

6. This Shattered World: A Starbound Novel

7. This Shattered World (The Starbound Trilogy, 2)

8. This Shattered World (A Starbound Novel (2))

9. This Shattered World (The Starbound Trilogy, 2)

10. This Shattered World: A Starbound Novel