Articles liés ŕ An Adventure in Statistics: The Reality Enigma

Field, Andy An Adventure in Statistics: The Reality Enigma

An Adventure in Statistics: The Reality Enigma 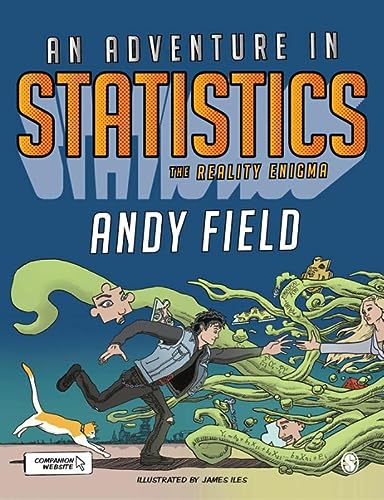 Once again, bestselling author and award-winning teacher Andy Field hasn't just broken the traditional textbook mould with his new novel/textbook, he has forged the only statistics book on the market with a terrifying probability bridge, zombies and a talking cat!

Andy Field's unique approach gently introduces students across the social sciences to the importance and relevance of statistics in a stunningly illustrated format and style. By weaving in a compelling narrative, he takes students on an exciting  journey through introductory level statistics overcoming potential anxiety around the subject and providing a vibrant alternative to the dullness of many typical offerings.

The medium, the message and the rock-solid statistics coverage combine to raise the level of attainment of even the most Maths-phobic student. It assumes no previous knowledge, nor requires the use of data analysis software.

In doing so, it provides an unrivalled launchpad to further study, research and inquisitiveness about the real world, equipping students with the skills to succeed in their chosen degree and which they can go on to apply in the workplace.

Our Facebook page for lovers of Andy Field's books and statistics-phobes alike is a place for readers to share their experiences of Andy s texts and where we post news, free stuff, photos, videos, competitions and more.

Andy Field is Professor of Child Psychopathology at the University of Sussex. He has published over 80 research papers, 29 book chapters, and 17 books mostly on child emotional development and statistics.

He is the founding editor of the Journal of Experimental Psychopathology and has been an associate editor and editorial board member for the British Journal of Mathematical and Statistical Psychology, Cognition and Emotion, Clinical Child and Family Psychology Review and Research Synthesis Methods.

His ability to make statistics accessible and fun has been recognized with local and national teaching awards (University of Sussex, 2001, 2015; the British Psychological Society, 2007), a prestigious UK National Teaching Fellowship (2010), and the British Psychological Society book award (2006). He adores cats (and dogs), and loves to listen to and play very heavy music. He lives in Brighton with his wonderful wife Zoë, his son Zach, his crazy spaniel Ramsey and Fuzzy the cat.

1. An Adventure in Statistics

2. An Adventure in Statistics: The Reality Enigma (Paperback)

Description du livre Sage Publications Ltd, United Kingdom, 2016. Paperback. Etat : New. First Edition. Language: English. Brand new Book. Shortlisted for the British Psychological Society Book Award 2017Shortlisted for the British Book Design and Production Awards 2016Shortlisted for the Association of Learned & Professional Society Publishers Award for Innovation in Publishing 2016An Adventure in Statistics: The Reality Enigma by best-selling author and award-winning teacher Andy Field offers a better way to learn statistics. It combines rock-solid statistics coverage with compelling visual story-telling to address the conceptual difficulties that students learning statistics for the first time often encounter in introductory courses - guiding students away from rote memorization and toward critical thinking and problem solving. Field masterfully weaves in a unique, action-packed story starring Zach, a character who thinks like a student, processing information, and the challenges of understanding it, in the same way a statistics novice would. Illustrated with stunning graphic novel-style art and featuring Socratic dialogue, the story captivates readers as it introduces them to concepts, eliminating potential statistics anxiety. The book assumes no previous statistics knowledge nor does it require the use of data analysis software. It covers the material you would expect for an introductory level statistics course that Field's other books (Discovering Statistics Using IBM SPSS Statistics and Discovering Statistics Using R) only touch on, but with a contemporary twist, laying down strong foundations for understanding classical and Bayesian approaches to data analysis. In doing so, it provides an unrivalled launch pad to further study, research, and inquisitiveness about the real world, equipping students with the skills to succeed in their chosen degree and which they can go on to apply in the workplace.The Story and Main CharactersThe Reality RevolutionIn the City of Elpis, in the year 2100, there has been a reality revolution. Prior to the revolution, Elpis citizens were unable to see their flaws and limitations, believing themselves talented and special. This led to a self-absorbed society in which hard work and the collective good were undervalued and eroded.To combat this, Professor Milton Grey invented the reality prism, a hat that allowed its wearers to see themselves as they really were - flaws and all. Faced with the truth, Elpis citizens revolted and destroyed and banned all reality prisms.The Mysterious DisappearanceZach and Alice are born soon after all the prisms have been destroyed. Zach, a musician who doesn't understand science, and Alice, a geneticist who is also a whiz at statistics, are in love. One night, after making a world-changing discovery, Alice suddenly disappears, leaving behind a song playing on a loop and a file with her research on it.Statistics to the Rescue!Sensing that she might be in danger, Zach follows the clues to find her, as he realizes that the key to discovering why Alice has vanished is in her research. Alas! He must learn statistics and apply what he learns in order to overcome a number of deadly challenges and find the love of his life.As Zach and his pocket watch, The Head, embark on their quest to find Alice, they meet Professor Milton Grey and Celia, battle zombies, cross a probability bridge, and encounter Jig:Saw, a mysterious corporation that might have something to do with Alice's thor News"Eight years ago I had the idea to write a fictional story through which the student learns statistics via a shared adventure with the main character." Read the complete article from Andy Field on writing his new book Times Higher Education article: "Andy Field takes statistics adventure to a new level" Stay ConnectedConnect with us on Facebook and share your experiences with Andy's texts, check out news, access free stuff, see photos, watch videos, learn about competitions, and much more. Video LinksGo behind the scenes and learn more about the man behind the book:Watch Andy talk about why he created a statistics book using the framework of a novel and illustrations by one of the illustrators for the show, Doctor Who. See more videos on Andy's YouTube channel. N° de réf. du vendeur AAZ9781446210451

3. Adventure in Statistics : The Reality Enigma

4. An Adventure in Statistics: The Reality Enigma

5. An Adventure in Statistics: The Reality Enigma

6. An Adventure in Statistics: The Reality Enigma

7. An Adventure in Statistics: The Reality Enigma

8. Adventure in Statistics : The Reality Enigma

9. An Adventure in Statistics