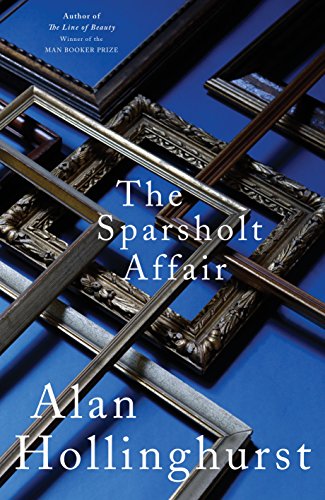 “Perhaps Hollinghurst’s most beautiful novel yet—a book full of glorious sentences by the greatest prose stylist writing in English today. The Sparsholt Affair is about gay life, about art, about family, but most of all it’s about the remorseless passage of time. There’s always something elegiac about the movement of time in a Hollinghurst novel; there’s an inevitable feeling of sorrow that comes with the end of each section. [Yet] The Sparsholt Affair is funnier and more warm-hearted than any of his books so far. Hollinghurst is wonderful on the ‘beautiful delay’ of university life, on the cloisters and the quadrangles, tentative intimacies building between friends and lovers: he can do an Oxford novel as well as Waugh. An unashamedly readable novel, undoubtedly the work of a master.” —Alex Preston, Observer

“Hollinghurst’s novels remind you of the deep pleasures of reading novels. Such is the penetrating clarity of his perception, his ability to convey many layers of experience at once. The Sparsholt Affair is likely to provoke that same flutter of recognition in readers. It’s the story of what happens before and after a sexual-political scandal, and about the lives colored by the affair... Around every episode there’s a thick membrane of social detail. The reflection and refraction of history in this book is reminiscent of Virginia Woolf’s family saga The Years. The Sparsholt Affair is wider in scope [and] more tender than anything Hollinghurst has written before.” —Johanna Thomas-Corr, London Evening Standard

“This is not your usual page-turner: it is a meticulously written, acutely insightful novel about human (mis)behavior, about time and unremitting change, with a skein of skillfully entwined what-happens-next? stories ranging over three generations. The felicities of the prose are unceasing: the observations and apercus are impeccably judged. Hollinghurst can be rigorously analytical one moment, slyly comic the next, erotic, then nostalgic, and subtle. He has his characters to a tee; the humour can ambush us. More movingly, a situation of multiple accumulations can be rendered by a single gesture—and a casual flick of the authorial eye. It would be hard, impossible, to over-praise this novel.”  —Ronald Frame, The Sunday Herald (Glasgow)

“Audacious, ambitious . . . an absorbingly complex novel reaching across seven decades, with a sense of lost time in the gaps it leaves. The narrative [is] alert to implicit meanings; Hollinghurst’s achievement is to make those meanings the stuff of all social exchanges. His sentences trust in our intelligence while doing justice to the unknowability of other people. Hollinghurst’s prose delights.” —John Mullan, The Times (Saturday Review)

“A multi-part story of a family plunged into scandal that is likely to delight fans of The Line of Beauty.” —Alice Jones, Top Picks in The Independent

“Without a doubt, both a highlight of Hollinghurst’s career, and one of the best books of the year. The novel charts the course of three generations of Sparsholts. Hollinghurst moves between times, places, and perspectives with the ease of a true master, any regret I felt at leaving each behind immediately mitigated by the majestic welcome of the next.” —Lucy Scholes, The Independent

“This book moves from strength to strength. The immense assurance of the writing, the deep knowledge of the settings and periods in which the story unfolds, the mingling of cruel humour and lyrical tenderness, the insatiable interest in human desire from its most refined to its most brutally carnal, grip you as tightly as any thriller. Hollinghurst layers situations that cumulatively portray a culture as it exists in time as well as in space: a constellation of longings and confusions. The novel keeps pulsing: an amazing amount of the passion and folly of the human comedy is woven in, all of it beautifully observed and memorably articulated.” —James Lasdun, The Guardian

“Pure Hollinghurst: a beautifully observed portrait of men and manners. A touchingly upbeat tale, and the dialogue is a joy.” —Max Davidson, Irish Mail on Sunday “The Best New Fiction”

“Exceptional—a vivid multigenerational tale; an epic exploration of sexuality, social class and scandal. . . A masterful observer of the subtleties of human behavior, Hollinghurst focuses on the shapes of the human heart, and reflects them back at the reader [with] heart-shattering beauty. He can capture a character in a single line, and unearth secrets in a sentence.” —Uli Lenart, Attitude Magazine (UK)

“Masterly, evocative—a portrait of life in the UK before and since the decriminalization of homosexuality [from] one of our finest novelists. . . Hollinghurst’s return with a new novel could hardly be better timed. The Sparsholt Affair exposes closeted gay lives of the past, and out gay lives of the present, culminating in a breathtaking description of a night of drugs and dancing in a gay club: a passage that grabs the reader by the sweaty palm and pulls him or her, elated, through the swirling debauch. The novel delineates, with leaps in time and place, shifting tastes in art and culture and social behaviors, changing attitudes to sex and relationships—and to class. As with all Hollinghurst’s work, it is utterly involving, uncannily realized, beautifully written, and very moving.” –Alex Bilmes, Esquire

“Hollinghurst is rightly regarded as one of Britain’s finest observers of life. If Jane Austen’s novels were about marriage eligibility, then a Hollinghurstian theme is about another sort of coupling.  [Yet] Austen would recognise his characters, many of whom are posh, privileged, well-educated. From Oxford in 1940 into our age, The Sparsholt Affair captures the changing nature of the homosexual experience as the country moves from shame and criminality to openness [and] dating apps; the most moving parts of the novel are about a man, whose long-term partner has died, being thrust into the [dating] market again, which has been transformed by the internet.”—Robbie Millen, The Times (UK)

From the internationally acclaimed winner of the Man Booker Prize, a masterly new novel that spans seven transformative decades in England--from the 1940s to the present--as it plumbs the richly complex relationships of a remarkable family.

In 1940, David Sparsholt arrives at Oxford to study engineering, though his sights are set on joining the Royal Air Force. Handsome, athletic, charismatic, he is unaware of his effect on others--especially on Evert Dax, the lonely son of a celebrated novelist who is destined to become a writer himself. With the world at war, and the Blitz raging in London, Oxford nevertheless exists at a strange remove: a place of fleeting beauty--and secret liaisons. A friendship develops between these two young men that will have unexpected consequences as the novel unfolds.
Alan Hollinghurst's new novel explores the legacy of David Sparsholt across three generations, on friends and family alike; we experience through its characters changes in taste, morality, and private life in a sequence of vividly rendered episodes: a Sparsholt holiday in Cornwall; eccentric social gatherings at the Dax family home; the adventures of David's son Johnny, a painter in 1970s London; the push and pull in a group of friends brought together by art, literature, and love. And evoking the increasing openness of gay life, The Sparsholt Affair becomes a meditation on human transience, even as it poignantly expresses the longing for permanence and continuity. Witty, tender, epic in scope yet rich in observation, this is a dazzling novel of fathers and sons; of family and home by a writer hailed by The Wall Street Journal as "one of the best novelists at work today."

Description du livre Picador, UK, 2017. Hardcover. Etat : New. Etat de la jaquette : New. 1st Edition. Signed 1st/1st fine/fine - limited edition with special decorative endpapers. Synopsis - In October 1940, the handsome young David Sparsholt arrives in Oxford. A keen athlete and oarsman, he at first seems unaware of the effect he has on others ? particularly on the lonely and romantic Evert Dax, son of a celebrated novelist and destined to become a writer himself. While the Blitz rages in London, Oxford exists at a strange remove: an ephemeral, uncertain place, in which nightly blackouts conceal secret liaisons. Over the course of one momentous term, David and Evert forge an unlikely friendship that will colour their lives for decades to come . . . Man Booker Prize-winning author Alan Hollinghurst?s masterly novel evokes the intimate relationships of a group of friends bound together by art, literature and love across three generations. It explores the social and sexual revolutions of the most pivotal years of the past century, whose life-changing consequences are still being played out to this day. Richly observed, disarmingly witty and emotionally charged, The Sparsholt Affair is an unmissable achievement from one of our finest writers. Signed by Author(s). NḞ de réf. du vendeur 001842