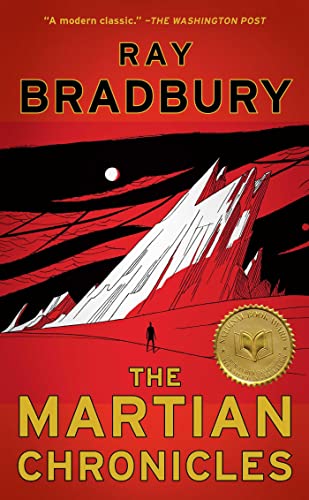 One minute it was Ohio winter, with doors closed, windows locked, the panes blind with frost, icicles fringing every roof, children skiing on slopes, housewives lumbering like great black bears in their furs along the icy streets.

And then a long wave of warmth crossed the small town. A flooding sea of hot air; it seemed as if someone had left a bakery door open. The heat pulsed among the cottages and bushes and children. The icicles dropped, shattering, to melt. The doors flew open. The windows flew up. The children worked off their wool clothes. The housewives shed their bear disguises. The snow dissolved and showed last summer's ancient green lawns.

Rocket summer. The words passed among the people in the open, airing houses. Rocket summer. The warm desert air changing the frost patterns on the windows, erasing the art work. The skis and sleds suddenly useless. The snow, falling from the cold sky upon the town, turned to a hot rain before it touched the ground.

Rocket summer. People leaned from their dripping porches and watched the reddening sky.

The rocket lay on the launching field, blowing out pink clouds of fire and oven heat. The rocket stood in the cold winter morning, making summer with every breath of its mighty exhausts. The rocket made climates, and summer lay for a brief moment upon the land. . . .

They had a house of crystal pillars on the planet Mars by the edge of an empty sea, and every morning you could see Mrs. K eating the golden fruits that grew from the crystal walls, or cleaning the house with handfuls of magnetic dust which, taking all dirt with it, blew away on the hot wind. Afternoons, when the fossil sea was warm and motionless, and the wine trees stood stiff in the yard, and the little distant Martian bone town was all enclosed, and no one drifted out their doors, you could see Mr. K himself in his room, reading from a metal book with raised hieroglyphs over which he brushed his hand, as one might play a harp. And from the book, as his fingers stroked, a voice sang, a soft ancient voice, which told tales of when the sea was red steam on the shore and ancient men had carried clouds of metal insects and electric spiders into battle.

Mr. and Mrs. K had lived by the dead sea for twenty years, and their ancestors had lived in the same house, which turned and followed the sun, flower-like, for ten centuries.

Mr. and Mrs. K were not old. They had the fair, brownish skin of the true Martian, the yellow coin eyes, the soft musical voices. Once they had liked painting pictures with chemical fire, swimming in the canals in the seasons when the wine trees filled them with green liquors, and talking into the dawn together by the blue phosphorous portraits in the speaking room.

They were not happy now.

This morning Mrs. K stood between the pillars, listening to the desert sands heat, melt into yellow wax, and seemingly run on the horizon.

Something was going to happen.

She watched the blue sky of Mars as if it might at any moment grip in on itself, contract, and expel a shining miracle down upon the sand.

Tired of waiting, she walked through the misting pillars. A gentle rain sprang from the fluted pillar tops, cooling the scorched air, falling gently on her. On hot days it was like walking in a creek. The floors of the house glittered with cool streams. In the distance she heard her husband playing his book steadily, his fingers never tired of the old songs. Quietly she wished he might one day again spend as much time holding and touching her like a little harp as he did his incredible books.

But no. She shook her head, an imperceptible, forgiving shrug. Her eyelids closed softly down upon her golden eyes. Marriage made people old and familiar, while still young.

She lay back in a chair that moved to take her shape even as she moved. She closed her eyes tightly and nervously.

Her brown fingers trembled, came up, grasped at the air. A moment later she sat up, startled, gasping.

She glanced about swiftly, as if expecting someone there before her. She seemed disappointed; the space between the pillars was empty.

Her husband appeared in a triangular door. "Did you call?" he asked irritably.

"I thought I heard you cry out."

"Did I? I was almost asleep and had a dream!"

"In the daytime? You don't often do that."

She sat as if struck in the face by the dream. "How strange, how very strange," she murmured. "The dream."

"Oh?" He evidently wished to return to his book.

"I dreamed about a man."

"How absurd; a giant, a misshapen giant."

"Somehow"--she tried the words--"he looked all right. In spite of being tall. And he had--oh, I know you'll think it silly--he had blue eyes!"

"How did you guess?" She was excited.

"I picked the most unlikely color," he replied coldly.

"Well, black it was!" she cried. "And he had a very white skin; oh, he was most unusual! He was dressed in a strange uniform and he came down out of the sky and spoke pleasantly to me." She smiled.

"Out of the sky; what nonsense!"

"He came in a metal thing that glittered in the sun," she remembered. She closed her eyes to shape it again. "I dreamed there was the sky and something sparkled like a coin thrown into the air, and suddenly it grew large and fell down softly to land, a long silver craft, round and alien. And a door opened in the side of the silver object and this tall man stepped out."

"If you worked harder you wouldn't have these silly dreams."

"I rather enjoyed it," she replied, lying back. "I never suspected myself of such an imagination. Black hair, blue eyes, and white skin! What a strange man, and yet--quite handsome."

"You're unkind. I didn't think him up on purpose; he just came in my mind while I drowsed. It wasn't like a dream. It was so unexpected and different. He looked at me and he said, 'I've come from the third planet in my ship. My name is Nathaniel York----' "

"A stupid name; it's no name at all," objected the husband.

"Of course it's stupid, because it's a dream," she explained softly. "And he said, 'This is the first trip across space. There are only two of us in our ship, myself and my friend Bert.' "

"And he said, 'We're from a city on Earth; that's the name of our planet,' " continued Mrs. K. "That's what he said. 'Earth' was the name he spoke. And he used another language. Somehow I understood him. With my mind. Telepathy, I suppose."

Mr. K turned away. She stopped him with a word. "Yll?" she called quietly. "Do you ever wonder if--well, if there are people living on the third planet?"

"The third planet is incapable of supporting life," stated the husband patiently. "Our scientists have said there's far too much oxygen in their atmosphere."

"But wouldn't it be fascinating if there were people? And they traveled through space in some sort of ship?"

"Really, Ylla, you know how I hate this emotional wailing. Let's get on with our work."

It was late in the day when she began singing the song as she moved among the whispering pillars of rain. She sang it over and over again.

"What's that song?" snapped her husband at last, walking in to sit at the fire table.

"I don't know." She looked up, surprised at herself. She put her hand to her mouth, unbelieving. The sun was setting. The house was closing itself in, like a giant flower, with the passing of light. A wind blew among the pillars; the fire table

bubbled its fierce pool of silver lava. The wind stirred her russet hair, crooning softly in her ears. She stood silently looking out into the great sallow distances of sea bottom, as if recalling something, her yellow eyes soft and moist. " 'Drink to me only with thine eyes, and I will pledge with mine,' " she sang, softly, quietly, slowly. " 'Or leave a kiss within the cup, and I'll not ask for wine.' " She hummed now, moving her hands in the wind ever so lightly, her eyes shut. She finished the song.

It was very beautiful.

"Never heard that song before. Did you compose it?" he inquired, his eyes sharp.

"No. Yes. No, I don't know, really!" She hesitated wildly. "I don't even know what the words are; they're another language!"

She dropped portions of meat numbly into the simmering lava. "I don't know." She drew the meat forth a moment later, cooked, served on a plate for him. "It's just a crazy thing I made up, I guess. I don't know why."

He said nothing. He watched her drown meats in the hissing fire pool. The sun was gone. Slowly, slowly the night came in to fill the room, swallowing the pillars and both of them, like a dark wine poured to the ceiling. Only the silver lava's glow lit their faces.

She hummed the strange song again.

Instantly he leaped from his chair and stalked angrily from the room.

Later, in isolation, he finished supper.

When he arose he stretched, glanced at her, and suggested, yawning, "Let's take the flame birds to town tonight to see an entertainment."

"What's so strange about that?&quo...

Man, was a a distant shore, and the men spread upon it in wave... Each wave different, and each wave stronger.

Ray Bradbury is a storyteller without peer, a poet of the possible, and, indisputably, one of America's most beloved authors. In a much celebrated literary career that has spanned six decades, he has produced an astonishing body of work: unforgettable novels, including Fahrenheit 451 and Something Wicked This Way Comes; essays, theatrical works, screenplays and teleplays; The Illustrated Mein, Dandelion Wine, The October Country, and numerous other superb short story collections. But of all the dazzling stars in the vast Bradbury universe, none shines more luminous than these masterful chronicles of Earth's settlement of the fourth world from the sun.

Bradbury's Mars is a place of hope, dreams and metaphor-of crystal pillars and fossil seas-where a fine dust settles on the great, empty cities of a silently destroyed civilization. It is here the invaders have come to despoil and commercialize, to grow and to learn -first a trickle, then a torrent, rushing from a world with no future toward a promise of tomorrow. The Earthman conquers Mars ... and then is conquered by it, lulled by dangerous lies of comfort and familiarity, and enchanted by the lingering glamour of an ancient, mysterious native race.

Ray Bradbury's The Martian Chronicles is a classic work of twentieth-century literature whose extraordinary power and imagination remain undimmed by time's passage. In connected, chronological stories, a true grandmaster once again enthralls, delights and challenges us with his vision and his heart-starkly and stunningly exposing in brilliant spacelight our strength, our weakness, our folly, and our poignant humanity on a strange and breathtaking world where humanity does not belong.