Articles liés ŕ The Ashes: It's All About the Urn: England vs....

Swann, Graeme The Ashes: It's All About the Urn: England vs. Australia: ultimate cricket rivalry

The Ashes: It's All About the Urn: England vs. Australia: ultimate cricket rivalry 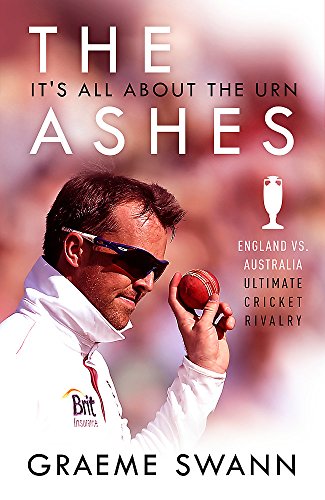 Graeme Swann leads us on a compelling adventure through one of world sport's most engrossing rivalries. He knows as much as anybody about the heat of England v Australia battles, having played in three series wins and also the whitewash defeat of 2013-14 when its intensity ended his international career. However, it brought out some of his best displays in Test cricket. But he is just one of dozens of colourful characters to have added their chapters to this great tome. The mock obituary of English cricket in the Sporting Times of 1882 was the forerunner of summers and winters of heaven and hell, depending on which side of the divide you were situated. When it comes to on-field relations nothing quite compares to the over-my-dead-body feel of the Ashes. From Grace to Sir Don, the most graceful of them all. From the foulest play to the fairest - contrast the 1932-33 Bodyline series affair to the image of Andrew Flintoff hunched over a distraught Brett Lee in 2005. From Ray Illingworth's famous walk-off in the Seventies, when an England team-mate was assaulted by a spectator, to Steve Waugh's hugely emotional lap of honour when he retired a quarter of a century later. Swann's book will reveal the magic of a series that first gripped him in his front room in Northampton as an aspiring spin bowler in the mid-1980s.

Graeme Swann is a former international cricketer for England. He was primarily a right-arm offspinner, and also a capable late-order batsman with four first-class centuries, and often fielded at slip. After initially playing for his home county Northamptonshire, for whom he made his debut in 1997, he moved to Nottinghamshire in 2005. He made his debut for England in 2000 but didn't play again until 2008 when he became an essential part of the team in all formats. In 2011 he was part of the team that claimed the number one world Test ranking spot. Graeme was involved in three Ashes tours, winning the Ashes in 2009 and 2011, he retired from all formats during the 2013 Ashes series. Since retirement Graeme has made the transition into commentary and is a summariser on Test Match Special and BT Sport cricket coverage.

1. The Ashes: It's All About the Urn: England vs. Australia: ultimate cricket rivalry

2. The Ashes: It's All About the Urn: England Vs. Australia - Ultimate Cricket Rivalry