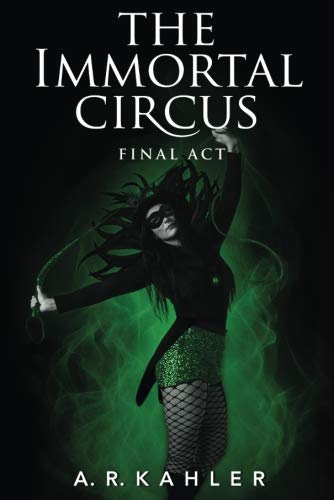 Despite Vivienne’s broken heart and deadly truths, the show must go on at the Cirque des Immortels. But it takes more than glamour and sex appeal to keep the Big Top running; without the magic and support Viv came to rely on, the circus is in danger. Now the troupe verges on rebellion, the war between Mab and Oberon rages on, and a horrifying menace looms—with Vivienne stuck in the middle of it all.

When Mab’s manipulations put others at risk, Viv has to decide where her heart lies. Everything depends on her choices. How can she know her true desires? And will she have what it takes to fight the demons she must face?

The first two books in The Immortal Circus trilogy—A.R. Kahler’s debut novels for adults—have been international bestsellers in serial form. Martyr, the first book in his post-apocalyptic YA fantasy series called The Hunted, will be published by Spencer Hill Press in the fall of 2014.

Like Viv and the troupe, Kahler is a wanderer. As an aerialist, he has toured with circuses across America and Europe. Travel enables him to experience the wild and wonderful world, from drumming with Norse shamans to dangling from unexpected rafters. He received his master’s in creative writing from Glasgow University. Kahler writes, climbs, and spins dreams in Seattle.