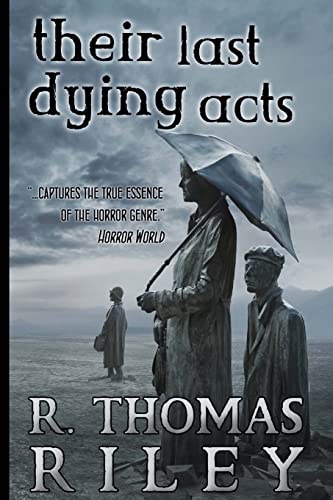 Description du livre Paperback. Etat : New. Language: English. Brand new Book. Their Last Dying Acts captures the true essence of the horror genre displaying the breadth and depth of an author's imagination. Riley does not hold back on the horror as he leads the readers through tales that feature monsters, both the imaginary and human kind, and horrific circumstances that can occur either in the darkest corners of the night or the brightest sunny day. From splatterpunk to psychological, from a snapshot of real life horror to a "Twilight Zone" unreality, these stories show the genius of a writer who can adapt his writing to wherever the story takes him. With stories like, Surveillance, a gritty police story, featuring a robot who would be man--a thoughtful allegory about racism in our society, very well-disguised and Heal Thyself, a story about the use of religion as a means of deception and the old motto of "What goes around, comes around", to No Strings Attached, a weird and thought-provoking story worthy of an episode of Rod Serling's The Twilight Zone. Nowhere is safe in the imagination of R. Thomas Riley. ptures the true essence of the horror genre." Horrorworld "If you like your short fiction bleak, dark and wonderful, Riley will take good care of you." John Sunseri, author of SILENCE IN HEAVEN and others "Riley's style is gritty and realistic and works perfectly." John Grover, author of CREATURES AND CRYPTS and FEMININE WILES "A writer that has studied his Rod Serling, channels just the right amount of Edgar Allen Poe's ghost, and taps that same Southern gothic vein that Joe R. Lansdale has been so blissfully strung out on all these years." Matt Wallace, Author of THE NEXT FIX. N° de réf. du vendeur APC9781479176571